Ortega is a character in Dragon Quest III, and is the father of the Hero/Heroine.

When the hero was just a baby, Ortega left on a quest to destroy the archfiend Baramos. He is shown in an intro movie in III, fighting a dragon on top of a volcano which ends with both of them falling in. The intro is further expanded in the Super Famicom and Game Boy Color remakes, showing Ortega travelling the world on his quest before finally reaching the volcano and the fateful battle.

Prior to this, Ortega visited nearly every town and significant location that his offspring later would, fostering a reputation as an incredible hero. Of particular note is his time spent in Mur, where the village children were in awe of him. One such youth, Petya, even viewed him as a surrogate father figure. Touched by the kindness of the children, Ortega left behind his helmet as a keep sake.

After falling through the mantle after his volcanic skirmish, Ortega found himself in Alefgard without his memories. Learning of the plight of the people, he made his way to Rimuldar and took upon himself the quest of defeating Zoma, eventually making his way to Charlock Castle and confronting one of Zoma's underlings, King Hydra, just moments before his child arrives.

The fight with King Hydra would be Ortega's last, his body so badly burned that he was unable to see clearly nor hear. He regains his memory as his life fades and with his dying breath tells his child that he is "Ortega of Aliahan and if you ever travel there, to tell my wife and child" what happened, that he's sorry he failed, and that he couldn't be there for them.

The Super Famicom and Game Boy Color remake expands on his travels as he is shown traveling to locations such as:

Ortega is a non-playable character, as the fight between Ortega and King Hydra is fully scripted. This fight cannot be won by Ortega, however through randomization, it can last for upwards of five minutes, and ultimately will end regardless once Ortega is out of MP . In the original NES version of Dragon Quest III, after being killed by King Hydra, a special "Ortega's Death" theme played. However, this song was removed from subsequent ports of Dragon Quest III.

Ortega is shown using the following spells during his fight with King Hydra:

Appears as part of the 2nd card series. 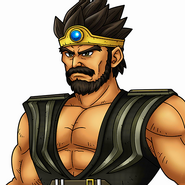 Ortega, as seen in Dragon Quest of the Stars
Add a photo to this gallery

Retrieved from "https://dragonquest.fandom.com/wiki/Ortega?oldid=213285"
Community content is available under CC-BY-SA unless otherwise noted.