Pankraz Gotha is a character from Dragon Quest V. He is a somewhat rough-looking man who is the father of the Hero. He is also the grandfather of the Hero's son and the Hero's daughter. Pankraz was later killed while fighting Bishop Ladja, a follower of Grandmaster Nimzo, the King of the Underworld.

Pankraz has the looks of a well-worn traveler and could likely be passed off as a toned down barbarian given his frizzy hair, fang necklace, leather kilt, and a partial breastplate that reveals some of his upper-body musculature.

Pankraz is a righteous and strong-willed sort, often willing to lend a hand and remaining conscious of those who may expose themselves to peril. He can be stern at times with his son but is nevertheless a protective parent, always healing the Hero's HP if it ever drops even the slightest from a single battle.

He married the prelate of a society of powerful magicians, earning their ire for taking her away from them. However, he was unrelenting and took her back to Gotha to make her his queen. Shortly after the birth of their son she disappears, prompting him to embark on a search for her.

Pankraz sets out with the Hero on a long journey; only Pankraz fully knows why. The only information Hero is given is that they are looking for something. He leads the player through the early stages of the game. First the pair visits Whealbrook, where they meet up with Pankraz's lifelong servant Sancho. Later, he contracts a cold, allowing the Hero and young Bianca to engage in nighttime adventuring a nearby manor, purging it of ghosts. Shortly thereafter, the two are charged with retrieving the kidnapped son of another liege, one of Pankraz's friends. They pursue and are successful in their rescue but Pankraz is killed unceremoniously in front of his unconscious son, instructing him with the quest to find the Legendary Hero and the Zenithian Equipment in order to rescue his mother.

After Pankraz's death, the Hero and Harry are sold into slavery into building a temple for Grandmaster Nimzo for 10 long years and the Hero is left an orphan. The Sabercat cub who traveled with his son is abandoned by Ladja after he kidnaps the children and roams the land, growing feral. The Sabercat takes Pankraz's sword with him wherever he goes as it is the last memento he has of his former master. After a long and complicated journey, the Hero finds out that Pankraz was actually the king of the land of Gotha and that he is the rightful ruler now that his father has passed away. It is later on revealed that the Legendary Hero he sought for so desperatly was his own grandson, who wouldn't be born for years. Towards the end of the game, he and his wife are shown to be reunited in the afterlife, very proud of their son and grandchildren.

While only available as a party member for a short time, and in small intervals at that, Pankraz is an incredibly powerful individual at the start of the game, out-leveling essentially every monster the player first encounters. He primarily attacks, having a high rate of scoring critical hits, but can also use healing magic and will always heal the Hero to full health if even a smidgen of his HP is lost in a battle. One of Pankraz' most notable skills, and one not given to any other party member in the game, is his ability to occasionally act twice per round.

Artwork for Pankraz in the DQV Super Famicom manual 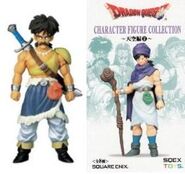 Pankraz DQ Trading Figure along with the Hero's

As he appears in Dragon Quest: Your Story
Add a photo to this gallery

Retrieved from "https://dragonquest.fandom.com/wiki/Pankraz?oldid=181397"
Community content is available under CC-BY-SA unless otherwise noted.