Patty (ルイーダ Ruīda?, also known as Luida in the Japanese versions), is a recurring character from the Dragon Quest series. She first appeared in Dragon Quest III, in which she is the proprietor of the bar in Aliahan. She functions as a party planner in the games she appears.

Patty utilises the common village woman sprite in the original versions of III, V, and VI, switching this for the Bunny girl design in the assorted remade versions of those titles. Starting with IX, however, Patty is depicted as a tall woman with long blue hair wearing it in a ponytail and blue eyes. Her attire is that of a female bar-tender, donning a revealing red/white blouse and a orange dress and wears brown boots. She wears gold bracelets on each of her wrists, and ties her hair with a large black bow.

Patty displays some personality in her brief dialogue in the older titles, being a perpetually cheery aid eager to set up the perfect adventuring party for the main character. Patty against a more distinct personality in IX, being presented as a woman of the world whose stubbornness is exceeded only by her compassion for others. Referring to her friends as "dear", "honey" or "sweetie" in conversation, including the hero, she caries herself as an older sister of sorts.

Her bullheadedness allows her to overcome hardships that would make others flinch, as demonstrated when she walked all the way from Stornway to Angel Falls on the mere possibility to convince Erinn's father to return back to Stornway. She is also a women of courage, shown when she went in to the Hexagon after a recent earthquake and explores the entire ruin before encountering the Hexagoon.

Patty is the proprietor of her eponymous bar in Aliahan. She will organise a party for the hero and offer words of advice.

Patty has settled in Gotha this time around, managing the bar on the second floor of the castle. When not pouring drinks for the castle guards and gossiping with the ladies, she'll service her king by helping him assign the human members of his party. Rumour has it that this Patty has a soft spot for certain monster loving geezers...

Tucked away behind the bar in Alltrades Abbey, Patty has improved her trade to the point that she can now manage the protagonist's more bestial buddies along with his human companions. How she got the head priest to allow her to set up a bar in an abbey is a question only the Goddess herself can answer.

Patty is introduced to the player while she was on her way to Angel Falls to find Erinn's father Edwinn. It turns out that she became lost in the Hexagon for some time, which is why the knights of Stornway are searching for her. Erinn remembers her name from her father's conversations, and she asks the hero to find rescue her. Once in the Hexagon, the hero must explore and search for Patty, finding her trapped under a rock dislodged during the earthquake at the beginning of the game. After defeating the Hexagoon that was inside the chamber, Patty thanks the hero and introduces herself properly. After reaching Angel Falls, she convinces Erinn to venture to Stornway in her father's stead to take over the inn.

In Stornway, at the inn called Quester's Rest, she functions as the party planner for the hero. If spoken to, she can add, remove or create characters for the hero party.

Her backstory is expanded during quest 125 ("Perk Up, Patty!"); completing it allows you to recruit her as a party member.

Note that she still runs the party planner at the counter while inside the Quester's Rest. Her name is a pun on "party" which she lets you create.

Patty was added to the game on its 5th anniversary for the Zoma challenge, setting up shop in the city of Astoria. She offers free advice, vocation changing, and the ability to enlist A.I. controlled characters to help players trying to solo quests and dungeons.

Patty starts out as a level 28 thief. She is equipped with a Deadly nightblade, her dirndil, her shoes, and a Lucky pendant; however, you must manually assign her Skill points.

Reprises her role, letting Luceus and Aurora choose their party members in the former and Lazarel and Theresa in the latter.

She manages the inn menu in the game. 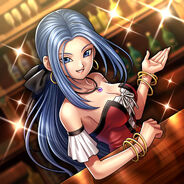