Pavo is a character in Dragon Quest IX. She is a Celestrian who resides at Quester's Rest and allows the player to utilize the local multiplayer features, known in-game as the Rapportal.

She is the sister of Aquila, as mentioned when she gives the quest that unlocks Aquila as a party member, and is also the only Celestrian who actually lives on the Protectorate.

Pavo has short silver hair and green eyes. She wears a small black top only covering her breasts, with two black detached sleeves starting at the upper part of her arms and ending at her middle finger, a choker and a skirt similar to that of the Hero/Heroine's followed by a violet waist cape underneath. Unlike Hero and Aquila she does not have the yellow layered leggings, instead having thigh high black leg warmers, and higher heeled boots than the other Celestrians.

Pavo appears in the Quester's Rest, helping others use the Rapportal, while wanting to know more about it as well. She is loyal to Corvus's teachings of helping mortals, even after he was captured by the Empire. During the post game, she gives the Hero the side quest When a Star Wishes Upon You for the Prayer pearl, which can save a Celestrian from near death, having been told from a star. When the Hero has obtained the pearl from Excalipurr, she has them go to Celestria in the Realm of the Almighty to give the pearl to Aquila. When the Hero has given the pearl to Aquila, and recruited him to their party planning list, she thanks the Hero for reviving her twin brother.

Pavo is seen in the Observatory, before following Corvus's teachings, giving the Luminary and his allies the Defuddle drops to cure the citizens of Aliahan from their protests of Ortega marrying Erdrick's future mother. 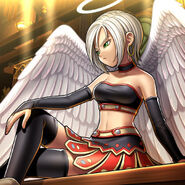 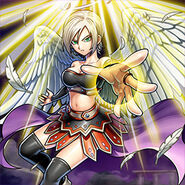 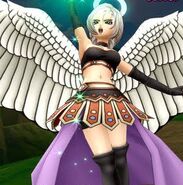 Pavo in Dragon Quest Rivals
Add a photo to this gallery

Retrieved from "https://dragonquest.fandom.com/wiki/Pavo?oldid=195730"
Community content is available under CC-BY-SA unless otherwise noted.