It is an indigo colored baboon with wings who is commonly the most powerful of their kind, originating as a boss in the Hall of Hargon for Dragon Quest II. They are now a common enemy in many Dragon Quest games, which is supported by their bestiary entires in the Dragon Quest Heroes games. (Stating that the first of their kind formed the Trinity with a Belial and Atlas)

A boss monster encountered in the Hall of Hargon. Armed with the Thwack spell and Kamikazee as well, Pazuzu can very easily kill your entire party. Generally, you will want to go all out and kill him as quickly as possible.

Pazuzu are a powerful A rank monster who you will need to synthesize Drakulard, Jamirus, and Night Clubbers. All of which are synthesizable monsters, thus it's no surprise that powerful X rank monsters require many Pazuzu to create. They can be synthesized or caught wild in the Dark World.

Recipe: Silvapithecus x Gigantes (Jamirus or King Squid can be used as well, but King Squid ends up in a rank decrease and in order to synthesize Jamirus you need Pazuzu, therefore it is wise to use Gigantes or just scout them) 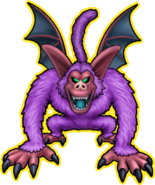 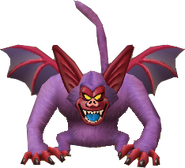 Pazuzu is based on an ancient Mesopotamian demon of the same name. A demon of the southwest wind known to bring famine during dry seasons. It's anatomy consists of having a body of a man, head of a lion or dog, two pairs of wings, and a scorpion's tail.

Retrieved from "https://dragonquest.fandom.com/wiki/Pazuzu?oldid=189214"
Community content is available under CC-BY-SA unless otherwise noted.