Pimiko is the Queen and ruler of Jipang in Dragon Quest III. The character of Pimiko is based on the real-life Himiko from Japanese history and legend.

By the time the hero arrives in Jipang, the real Pimiko has been killed by Orochi, who, in disguise, assumes the role of Pimiko and orders the villagers to sacrifice young women to appease Orochi.

In the remakes sans the iOS version, Pimiko can be found alive and well on the upper floor of Jipang's Treasures n' Trapdoors track, which can only be unlocked via a wish granted by defeating Xenlon after finishing the main game. She seems to be wandering around aimlessly and mentions that she's not quite sure what she's doing in such a place.

She appears as part of the Dragon Quest III story event.

She appears as part of the Dragon Quest III story event. 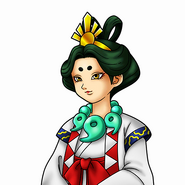 Pimiko, as seen in Dragon Quest of the Stars
Add a photo to this gallery

Despite the player being unable to do so, the old man in the Hermitage can take the form of Pimiko with the usage of the Mod rod.

Retrieved from "https://dragonquest.fandom.com/wiki/Pimiko?oldid=211949"
Community content is available under CC-BY-SA unless otherwise noted.