The platinum sword is a weapon found in the Dragon Quest series.

The platinum sword has an attack bonus of +60 and a style bonus of +45. The Hero, Carver, Milly, Ashlynn, Amos, Terry, and Goowain can equip it. Dragooners drop them 1/64 of the time. They cannot be bought or sold. One is given as a price at Medford's Manor for bringing 30 mini medals.

The platinum sword has an attack bonus of +60 and a style bonus of +45. It can be equipped by the Hero, Sir Mervyn, and Aishe. It can be purchased at the Grand Bazaar stage of the Immigrant Town for 3,000 gold and sold for 1,500 gold. One is given to the party in Providence by the shopkeeper when the town is attacked by monsters. If it is equipped along with the Platinum mail, Platinum headgear, and Platinum shield when being ranked for the Excellence Grading Organisation, it provides a +30 bonus to style.

The platinum sword has an attack bonus of +40 and can be sold for 3,000 gold. The Hero, Jessica, and Angelo can equip it. Hell gladiators will rarely drop them.

It can be bought in Gleeba and Bloomingdale, and it can also be created by Alchemy. The required alchemy materials are one unit of platinum ore, one Hephaestus' flame, and one iron broadsword.

It has a rarity rating of one star.

Platinum swords can be bought at Puerto Valor's casino, or forged from a recipe found in Sniflheim. It can equipped by the Luminary, Erik, Sylvando, and Hendrik. In addition, Jasper wields them during his boss fights, but leaves one in his room at Heliodor Castle for his victory at Yggdrasil. 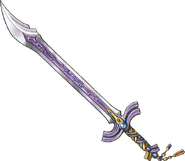 Scan Battlers artwork.
Add a photo to this gallery

Retrieved from "https://dragonquest.fandom.com/wiki/Platinum_sword?oldid=179467"
Community content is available under CC-BY-SA unless otherwise noted.