The poison needle (formerly poison knife) is a weapon in the Dragon Quest series. It is a novelty weapon that has a 1/8th chance to instantly kill an enemy in a single strike, but otherwise can only inflict one point of damage. Both of these attributes make the needle an invaluable weapon against metal slimes.

The poison needle will only deal 1 point of damage (never zero) and has an increased chance of making a critical hit, so it is useful against metal slimes. It can be purchased in Coburg & Hay.

The poison needle has an attack bonus of +1 and a style bonus of +15. It can be equipped by Maribel, Ruff, and Sir Mervyn. It is obtained from the Medal King after turning in 45 mini medals.

The Poison Needle is a weapon with no bonus attack and will always do 1 damage. However, it can randomly kill a non-boss enemy. The needle can only be held by Jessica and is required for various alchemy recipes. It can be bought for 1900g and sells for 1000g.

A prickly pin that can fell a foe with a single stab if correctly aimed.

The Masked Queen and the Tower of Mirrors

A prickly pin that can fell a foe with a single stab if correctly aimed. 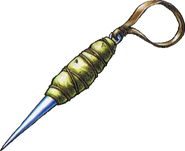 Artwork from IV to VII.
Add a photo to this gallery

Retrieved from "https://dragonquest.fandom.com/wiki/Poison_needle?oldid=176547"
Community content is available under CC-BY-SA unless otherwise noted.