The prayer ring (also referred to as the ring of prayer) is a recurring accessory in the Dragon Quest series, appearing in IV, V, VIII, and IX. While it may have some various bonuses, but its main use is to restore MP. Generally, it can break after each use whether it is the first or the tenth time.

The Prayer Ring is an accessory that increases defence by 5, and can be used as an item to recharge MP. It may break after use.

The Ring of Prayer can be used by any character to restore around 20 MP. However, it will break afterwards.

As with previous games, it can be used to restore some MP. It has a chance to break after every use. It can be made with alchemy by combining the Gold Ring and the Seed of Magic. It can be used to make the Agility Ring, Magic Armour, Magic Shield, Recovery Ring, Ruby of Protection and Strength Ring.

"A righteous ring that restores a modicum of MP when used."

The Prayer Ring is an accessory that gives a defense bonus of +3. It can also be used as an item in battle to restore some MP to an ally but will disintegrate after repeated use.

The ring cannot be bought and can only be made with alchemy by combining a Gold Ring and two Sage's elixirs. It is also used as a base component for various alchemy recipes such as: 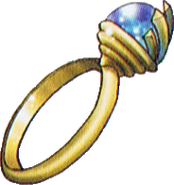 DQVII artwork.
Add a photo to this gallery

Retrieved from "https://dragonquest.fandom.com/wiki/Prayer_ring?oldid=177668"
Community content is available under CC-BY-SA unless otherwise noted.