The Prince of Cannock is typically shown wearing a green frock. Not much is known about him other than that he sets out to find his cousin, the Prince of Midenhall, in order to fight Hargon.

The prince is the son of the king of Cannock, who is a descendent of Princess Gwaelin. No further details of his past are known.

A spoiler draws near! Click 'show' to display, otherwise run away!
The prince sets out to meet his cousin after hearing of Hargon's attack on Moonbrooke. However, the 2 have difficulty finding one another until they meet at the inn in Leftwyne. Together they set out to defeat Hargon together. The player is unable to travel south to Moonahan until the prince of Cannock is in the party, making him an essential companion.

The prince plays a support role in battle, as he does not have great strength and cannot equip the best weapons and armor.

In the remakes of Dragon Quest II, the prince becomes ill after staying at the inn in Beran. The other heroes must travel and retrieve an Yggdrasil leaf in order to cure him and continue adventuring. This event happens only once.

The prince of Cannock is one of many past Dragon Quest characters who come to stay at the Quester's Rest as part of the bonus wifi content. He became available for download through DQVC on October 1, 2010, with the name "Prince Princeton."

When the Luminary visits Cannock and speaks with the king, the monarch explains that his son vanished in a puff of smoke the moment he declared his intent to vanquish the Children of Hargon, and asks the Luminary to seek him out. True to form, the Prince of Cannock is always one step ahead of the party, and the group must visit the Roamer Encampment, the Imperial Pantry of Parthenia, and Whealbrook before being told the young man is wandering in the Neverglade forest.

Based on the name you choose for the Prince of Midenhall, the Prince of Cannock's name is selected from a list of eight names. They are Bran, Glynn, Talint, Numor, Lars, Orfeo, Artho, and Esgar. In his appearance as a special guest in the Quester's Rest of Dragon Quest IX, he is given the name Princeton. 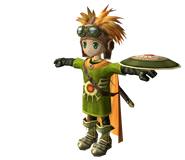 Retrieved from "https://dragonquest.fandom.com/wiki/Prince_of_Cannock?oldid=204633"
Community content is available under CC-BY-SA unless otherwise noted.