Princess Medea is the daughter of Trode and the Princess of Trodain.

She wears a white and red dress with an indigo cape, gold jewelry and gold shoes.

Princess Medea is very compassionate, sweet, and caring. This is evidenced through her rescuing the Hero when he was unconscious, accompanying her father to confront Dhoulmagus, and raising the Hero's spirits through telepathy.

She is not jealous, as shown when she was happy that Jessica returned to the party despite Jessica being a rival for the Hero's romantic interest in the 3DS version.

No known history is known about her mother prior to the game, but the Nintendo 3DS version reveals that her mother had died many years before the events of the game and that Medea became depressed by her death. When she was born, she is promised to be married to Prince Charmles of Argonia, as part of a promise made by her grandmother and Charmles' grandfather. Shortly after her mother's death, while walking in the forest near Trodain, she hears some noise nearby and sees a tiny mouse emerge from a nearby bush. Following the mouse, she comes across an unconscious boy, who she discovers to have a terrible fever. Wanting to help him, she heads back to Trodain and tells her father, who follows her back to where she had found the boy. After seeing the boy, he orders two of his men to take the boy back to the castle. Sometime later, after learning that the boy's fever has gone down, Medea decides to stay by his side until he wakes up. Shortly later, when the boy finally wakes up, Medea greets him, telling him that he will be just fine. At an unknown point in time after this encounter, having developed feelings for the boy, asked her father to allow him to join the ranks of the palace guardsmen so that they could spend more time together.

When Dhoulmagus stole the scepter from its slumber, Princess Medea and King Trode had been within the confines of the magical seal that prevented the sceptre's first spell from affecting them, though Dhoulmagus would immediately curse them both directly, turning them into a horse and a troll rather than stone like the rest of the inhabitants of the Kingdom of Trodain.

Once King Trode and The Hero had set off to find Dhoulmagus, they encounter the bandit from Pickham, Yangus. He charges a toll to cross the bridge, not knowing that he was talking to King Trode himself. She is first seen defending her father when the townspeople of Farebury attack King Trode because of his apperance believing him to be a monster. Not much happenes to her during the party's time on the Eastern Continent until they come to Yangus' home town of Pickham.

While King Trode had been drinking at the local pub, since this is the only other place in the world other than Tryan Gully that doesn't judge on apperance, she is kidnapped by Mitts, a common though pathetic theif. It is found out that Medea had been sold to a bandit named Red, an old acquaintance of Yangus. She is reaquired when Yangus gives Red the Venus Tear taken from the Swordsman's Labyrinth.

Once the party reaches the Western Continent, they must head to Argonia to retrieve the sun Mirror in order to open the Veil of Darkness cast by Dhoulmagus to enter the Dark Ruins. Here, the party first meet King Clavius and his more than spoiled son, Prince Charmles. In order to gain the king's trust, the party must take Charmles to the Royal Hunting Grounds so that he may defeat an Argon Lizard and claim the Argon Heart they drop. One morning, while the party awakes on their side quest, they find Prince Charmles attempting to mount Medea. This would also end up being a great reason she dislikes him.

While on their quest to retrieve the Magic Mirror, the party meets the old wizard who used to work at the Castle of Argonia. He is the first person to see Medea past her cursed form and tells her to drink from the Mystical Spring. He says that the spring gives off curse repealing powers. She is the first to drink from the spring and within seconds she is transformed back to her human form. After a slight conversation, it is found out that the effects of the spring are only temporary because of the high amount of dark power the curse had on Trode and Medea. King Trode then asks the Hero to bring Medea back to the spring every once in a while so that she may be lifted from the burden of carrying all the stuff from the carriage.

After this, Medea appears to the hero in his dreams, most likely because of the effect of the Mystical Spring Water. This only occurs when both are asleep at the same time. During this, we begin to discover more about Medea and of the hero's unknown background.

After the Defeat of the Dark Lord Rhapthorne, Medea and Trode are returned to their human forms as the curse of the scepter starts to lift from them and Trodain Castle.Several months pass and the day finally comes, Medea's obligation as princess to marry Prince Charmles of Argonia. Before she leaves for Savella Cathedral, she asks that the Hero walk with her through the castle one final time. Once the party arrives at Savella Cathedral, however, they are driven away by Prince Charmles on account of them being to common. At this point, there are two endings. The original ending happens with the Hero interrupting the wedding and him with Princess Medea fleeing hand in hand to a carriage driven by King Trode, with both finally revealing their true feelings of love towards each other, while Prince Charmles receives a giant scolding from Clavius because of the Great Argon Heart he had purchased long ago during the Bazaar at Argonia. The game concludes with them deciding to live happily ever after. The alternate ending comes when it is found out that the Hero is actually the son of the rightful heir to the throne of Argonia, his father Eltrio who had concieved him with his Dragovian mother Xia. The hero is given an Argon Ring that had belonged to Eltrio who had given it to Xia. It is given to the hero by Chen Mui as a momento about his parents. When the party is refused entry into the wedding by Charmles for them being too common, it is Angelo that gives the Hero the idea to talk to King Clavius and make a plea to marry Medea, since his father Eltrio had been the rightful heir to the throne. While believing the Hero's story about him being Eltrio's son, Clavius first denies the Hero's request because it would throw the kingdom in turmoil if another heir to the throne appeared, but reconsiders when the Hero interrupts the wedding. Princess Medea and the Hero are married. 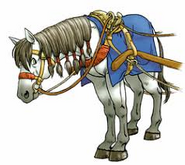 Princess Medea in horse form after she is cursed.

Princess Medea in human form after going to the Mystical Spring and drinking from it.

Princess Medea in the bonus ending where she and the Hero marry.
Add a photo to this gallery

Retrieved from "https://dragonquest.fandom.com/wiki/Princess_Medea?oldid=186656"
Community content is available under CC-BY-SA unless otherwise noted.