Psaro's pawn is a monster in Dragon Quest IV.

He is responsible for the sudden disappearance of the children of Strathbaile, using the Taleria to lure them to his nearby castle in hopes of incidentally killing the Chosen. Unbeknownst to him, this plan never had a chance of succeeding, because the Hero was being brought up secretly, far away from Strathbaile. After being tasked with recovering the missing children, Ragnar enters the castle with his companion Healie, discovers the plan, and kills Psaro's Pawn, saving the children and becoming hero of Burland. 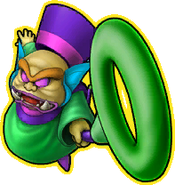 Retrieved from "https://dragonquest.fandom.com/wiki/Psaro%27s_pawn?oldid=184066"
Community content is available under CC-BY-SA unless otherwise noted.