Psaro, (formerly Saro) is an antagonist in Dragon Quest IV and is both a recurring character & monster in the Dragon Quest series. He is a powerful demon & chief of the demon tribe with a passionate but conflicted hatred for humanity, so much so he wished to purge them for the betterment of the world.

Psaro at first appears fairly humanoid, though his red eyes, pointed ears, and vast powers would no sooner reveal him for what he really is. He has long silver hair and wears a dark outfit with a single distinct shoulder pad, spiked and appearing to be made of bone, and a long fur cape. Upon using the Secret of Evolution he turns into a likeness of Estark and steadily morphs into a vicious horned demon with a second face on his torso as the player fights against him. The transformation undergoes seven forms, all in the same battle.

Psaro loathes humans, his self-appointed title of Manslayer likely derived from his stance on human presence. Despite this intense hatred, Psaro is remarkably kind to all other beings, notably monsters and especially the elf Rose, having decided to sterminate humanity primarily in order to protect her from their greediness and better the world in the process.

His romantic attachment to Rose is so strong that it drives him into a self-destructing insanity when he learns of her murder and he can only be freed from the Secret of Evolution's twisting power if she is revived and brought before him. In the sixth chapter of the story, while spending time with the party he develops a personality which is known to be tsundere as seen by his party chat dialogues, starting to slowly change his opinion on humanity for the better as he warms up to the group.

While he did not express regret towards his past misdeeds, as they were done truly beliving in their righteousness at the time, Psaro did at least empathize with the sense of loss fealt by the Hero after the destruction of their home village, having himself experienced true loss after the temporary death of Rose, and he truly felt genuine gratitude towards the Chosen for having saved both of them.

Psaro is mentioned in every chapter, and his actions drive the story forward.

Shortly before the events of the prologue, Psaro had decided to give in to his hatred for humanity, phomented by his subordinate Aamon and having become fed up by humans' treatment of monsterkind as well as their greediness constantly endagering his most beloved person, his lover Rose. Starting his campaign towards the supposed complete annihilation of the humans, he began trying to resurrect Estark, the Lord of the Underworld, hoping that under his leadership, monsterkind could take control of the world.

In the first chapter, Psaro supposedly ordered the kidnapping of the children of Strathbaile in search of the child that was prophesied to stand against the Lord of the Underworld one day, but Ragnar was able to fight Psaro's Pawn and rescured the unharmed youngsters.

In the second chapter, after Alena's group already met and defeated a monster that in the village of Taborov was taking young women as sacrifices in his name, Psaro, under his alias of Psaro the Manslayer had become the top contender in the Tournament of Endor, hoping to find the Hero among the partecipants, having already defeated five combatants in succession when Alena and her party arrives. But after Alena defeated five fighters as well, he was nowhere to be found and Alena was declared the champion of the tournament. It is presumed that he had went after the Armlet of Transmutation, which Alena had given up sometime earlier to some thugs presumably under his or Aamon's orders, to save Anya, the fake tsarevna, in Vrenor.

In the third chapter, when Torneko arrived in Endor, the tournament and Psaro were mentioned by several townspeople in hushed breath, and in the fourth, after the sisters Meena and Maya had cornered Balzack, the Marquis de Leon appeared in his aid, stating that their new master, Psaro would not be happy about it, and he then easily defeated the sisters.

The fifth chapter started with Psaro finally being able to locate the prophetized chosen hero, leading a group of monsters into the Hero's hometown, having gained hospitality by tricking a local men under the false identity of a lost poet. Meeting a fierce and violent resistance from the villagers, every townsfolk ended up killed in the following struggle, with ironically the exception of the sought after youth, thanks to the sacrifice of their friend Eliza who decided to act as their body double. Informed that the hero allegedly had been killed by one of his subordinates, Psaro and his forces left the now devastated village. After this, Estark's Crypt was discovered by the miners in Mamon Mine, with Psaro immediatly leading a group of monsters from the Diabolic Hall to the mine. He was successful in resurrecting the ruler of evil, but much to his surprise and horror the hero and his party were able to defeat Estark, realizing that the prophetized Hero had escaped his prior attack. Before Psaro could engage the party in combat, he was informed by one of his subordinates that Rose had been kidnapped by humans, so in a panic, Psaro rushed out the mine in an attempt to save her. Next, scenes of Psaro's past are seen in a dream sequence if the hero stays in Strathbaile's inn.

Tragically, Psaro was unable to reach her in time, and his cherished lover was murdered by her abductors. Psaro fell into a deep state of self-destructing grief, anger and hatred, deciding to wipe out humanity once and for all by using on himself the Secret of Evolution previously used by Estark, which he had before held off knowing full well of the heavy price it would take. In truth it was his own subordinate Aamon that had orchestrated the death of Rose, knowing full well that the elven woman was the only restrain that Psaro had. Aamon had since long manipulated him by phomenting Psaro's hatred while furthering his dark plans behind his back, planning to take the Secret of Evolution and the control of monsterkind for himself after his former master had fallen into total madness, with he and the legendary hero mutually defeating one another.

After using the secret of evolution upon himself, Psaro took up residence in Nadiria, transforming into the monstruosity known as Psaro the Manslayer. Having seemingly lost all memories save for his name and his oath to destroy humanity, the Chosen were left with no choice but to put an end to the crazed man, for then only narrowly escaping the collapse of their battleground thanks to the timely rescue from the Zenith Dragon.

In the remake-exclusive sixth chapter however, the party heard word of a legendary bloom of the world tree that could fully revive the dead. Setting out to find the bloom, the Chosen then used it to revive Rose. Aware that she was murdered at the orders of Aamon, she insisted that she accompany the group to Nadiria to stop her lover. When she confronted the hideous form Psaro had become, the Secret of Evolution was undone by her desire-filled magical ruby tears and Psaro was returned to his previous humanoid form and sanity. After being informed of Aamon's conspiracy, a deeply grateful Psaro joined the Chosen in their mission to slay the scheaming demon, in the process beginning to soften his views on humanity. After the treacherous Aamon was defeated for good, Psaro decided not to join the rest of the Chosen in their visit to Zenithia, fully aware that he wouldn't be accepted there due to his past actions. He was however confident that one day he might meet again the hero, although he himself couldn't say for sure if it would be as friends or foes. He then abbandoned his position as the master of monsterkind, quietly retiring to live alongside Rose.

Interestingly the final reward given by Chow Mein and Foo Yung, is an apparent impersonator of Psaro. Calling himself Psaro Queen of the Desert and assering to ail from Femiscyra, the naked man becomes one of the citizens of the Immigrant Town.

Psaro is mentioned in an indirect way by a scholar in Coburg Castle who claims to be studying psarology, the name of the science being derived from the legend of Psaro and it being centered about the study of the Secret of Evolution.

Psaro appears alongside Rose in the near-future version of Reaper's Peak. He is confrontational when spoken to, accusing the Hero of wanting to kidnap Rose for her tears before backing off and telling him to leave them in peace.

Psaro's initial state is quite powerful; he starts at level 35 and all his stats are high, not to mention he can learn powerful spells such as Lightning Storm and Magic Burst (most of which originally premiered in later Dragon Quest installments.) If the player chooses to pursue the bonus content and make Psaro an ally they will quickly find that he is more than a jack-of-all-trades, being adept at healing, support, and especially offensive abilities. If the time is taken to level him up he will swiftly become the most powerful ally in the game. He can also equip cursed equipment without penalty and without having his stats zeroed. He can also equip the items given by Chow Mein and Foo Yung, which include:

Psaro appears as a playable character, as well as the boss for Legend Quest IV in Chapter 7: The Demon Lord.

After the hero of Monster Battle Road Victory wins over their rival Ryuuta, Psaro escapes from the game world to the real world to challenge the hero. After clearing the game, he will be at the harbor waiting for the hero to challenge him again.

Psaro is a secret playable character in the game. In the original Japanese version, he is part of the downloadable content, but he is included by default in international versions of the game.

Like Alena, Kiryl and Maya, this Psaro ails from a time after the conclusion of the events of Dragon Quest IV, having both fought against and alongside the aforementioned heroes; summoned to the kingdom of Arba from his home dimension by Empyrea like the others, his reasons for joining the party are personal, as he wants to take revenge on Velasco for taking advantage of his monstrous brethren and end the curse placed on them, thou before that, Psaro will appear as a "Mysterious Swordsman" who randomly appears in a few levels before disappearing.

In order for Psaro to join the party, he must first be convinced of their worthiness by beating him in battle while he is accompanied by two Sir Roseguardin in the quest "A Monstrous Apparition", which can be undertaken after defeating the Barbatos at Yggdrasil. He wields greatswords in combat and uses a combination of Zam magic and martial arts. For his Coup de Grâce, Psaro uses a fully mastered Secret of Evolution to transform into his demonic form and blasts enemies. Due to his status as a secret character, Psaro will not appear in cutscenes and he has no direct impact on the main storyline.

Psaro returns once again in the sequel, although just like the other playable characters of the first title that did not take part in the main story of the sequel, he can only be used in dungeon maps.

If the player chooses to pursue the bonus content and make Psaro an ally they will quickly find that he is more than a jack-of-all-trades, being adept at healing, support, and especially offensive abilities. If the time is taken to level him up he will swiftly become the most powerful ally in the game. 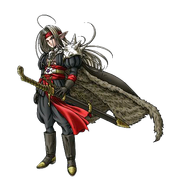 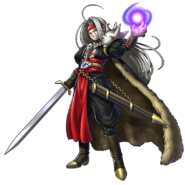 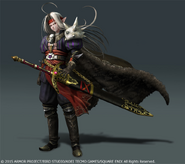 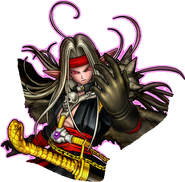 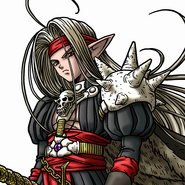