Queen Ferz is a boss monster who appears in Dragon Quest V and a member of the Order of Zugzwang. She in seen guarding the entrance to Crocodilopolis in the guise of the hero's mother, Madalena. Upon being found out, she challenges the party to a fight to protect the founder of the Order of Zugzang, the God-King Korol.

Ferz signature form bears a striking resemblance to Atlas or a Gigantes. However, due to being known solely as a 'her' yet definitely looking very masculine in this form, it is impossible to determine whether this is her true form or not.

Ferz is incredibly loyal to King Korol, referring to them as 'The God-King Korol'. She is very devious, using her power over illusions to make herself appear to be the Hero's mother, Mada. Once the Hero refuses to join Korol and states that he would then go against his own mother, Ferz assumes that the Hero already knows that she is, in fact, not his mother and assumes the form she is most well-known as. Being a member of Order of Zugzwang, she speaks with a very thick Russian accent and speaks using phrases such as 'Your mother is long ago no part of this world!' and 'I will remove from you the soul, and you will be like every other people here!'.

Queen Ferz in encountered at the entrance to Crocodilopolis. She assumed the guise of the hero's mother to get him to join their side, but ultimately failed. After realizing that the hero suspected that she was not who she said she was, she transformed into a ferocious giant to do battle. It is unknown whether this giant was her true form or not. 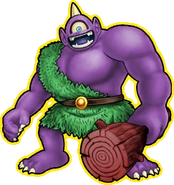 Queen Ferz's artwork for MBRV.
Add a photo to this gallery 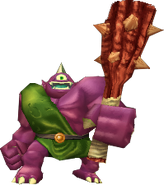 Retrieved from "https://dragonquest.fandom.com/wiki/Queen_Ferz?oldid=174143"
Community content is available under CC-BY-SA unless otherwise noted.