Queen Voluptua is a character from IX. She's the current beautiful and vain Queen of the desert town, Gleeba and has a trouble-making, yet softhearted, pet lizard she calls Dracky-Woo.

When she first appears, Voluputa is vain and only cares for her pet. She does not listen to reason and is quick to fire servants.

She boasts her prized possession; a ballroom sized area that serves as her private bathing chambers, and can be seen from the second floor of her castle. It is designed a bit like an oasis (which links to the palace name- the Mirage Mahal); being dotted with exotic flowers and palm trees. She is the daughter of the late King Aqueus, The High Drator, and is an incredibly vain person. She is more interested in her beauty than the safety and well-being of the kingdom, and as such, she is a disappointment to the citizens of Gleeba, including her father.
A spoiler draws near! Click 'show' to display, otherwise run away!

Voluptua is given a Fygg as a present and the Hero asks to have it. She refuses, stating she has plans to cut it up and use it in her bath. She then kicks the Hero out of the royal bathing chamber, forcing him to look for an alternate route. After the Hero breaks into the bath through the the roof, he and Voluptua witness Dracky-Woo gobbling up a slice of fygg. This backfires, as he turns into the Grand Lizzier, a giant buffed-up version of himself capable of talking. He proceeds to kidnap the Queen because he wants to be her "knight in shining armor". Once the Hero traverses through the Plumbed Depths and defeats him, the Queen realizes her mistakes, and helps Gleeba to regain its former glory.

She appears during the Dragon Quest IX story events.

The name "Voluptua" is derived from the word "voluptuous" - full of delight or pleasure of the senses, or given to or spent in enjoyment of luxury, pleasure, or sensual gratification. This explains the Queen's abnormal obsession with her beauty and constant bathing. 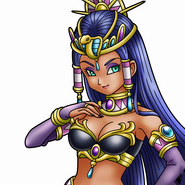 Queen Voluptua, as seen in Dragon Quest of the Stars
Add a photo to this gallery
Retrieved from "https://dragonquest.fandom.com/wiki/Queen_Voluptua?oldid=195759"
Community content is available under CC-BY-SA unless otherwise noted.