Start a Wiki
watch 04:10
'Dragon Quest 11' Beginners Guide: Rab
Do you like this video?

Lord Robert, or simply Rab is a character in Dragon Quest XI. A capable spell-caster and martial artist, he fights with heavy wands or claws.

Rab is an elderly man with a bushy pair of eyebrows and a moustache, his head covered by a red fez. He wears a red open vest with intricate yellow patterns over a long-sleeved white tunic and a black sash worn around his waist. He also wears a pair of orange trousers, leather shoes worn with yellow socks, and he walks around with the help of a cane. Rab is always seen carrying a large backpack and other kit as well.

Rab may be old, but he still has a bit of a mischievous and often mysterious side. He is gentle, playful, and quite approachable, but can be stern if necessary. Rab is also shown to be the quintessential "dirty dog" with an eye for pretty women, something his companions do not hesitate to call him out on. A Drasilian noble by birth, Rab feels a strong sense of duty to family, friends, and kingdom; though his age sometimes gets the better of him, Rab goes to whatever lengths he must to see things through.

A Drasilian noble by birth, Robert underwent the rites afforded to those of his line. and trained under Grand Master Pang at Angri-La to the south. He was a rather difficult student, easily given to his taste for perversion, and was hence rapped countless times with the "naughty stick". While he was mostly successful in his training, Rab never took his studies quite as seriously as Pang would have liked, and so never mastered the ultimate techniques that were expected of him.

Rab was eventually appointed to the court of his own son-in-law, King Irwin, via his daughter Eleanor, and studied as a scholar when he came across the legend of the Luminary. For years, he would serve as advisor to the King and be granted invitation to the Colloquy of Kings that periodically convened to steer Erdrea's governance.

On one particular night did the great Yggdrasil erupt in light, signaling the birth of a new Luminary and the coming of a dark age that he would one day combat. This Chosen of Yggdrasil would be Irwin's son, born with Her mark on his hand.

As the young Luminary was to be presented to the Colloquy, Rab and the others fiercely debated what his coming might foretell. Many saw it as an ill omen on a dark and stormy night, some plotting to kill the child because he represented a disruption in what was a longstanding peace between nations. But Irwin stood firm, and he gave an impassioned address to the assembly to spare his son's life. The assembly concurred after further deliberation, and was adjourned.

Soon after, Dundrasil was swarmed over with monsters that had not appeared in many a century. The women and children, among them Eleanor, Princess Jade of Heliodor, and the young Luminary, were sent out through an underground route. The four kings and Rab pushed back the hordes of monsters, but the assault continued. Irwin fought to the last to secure the escape route and succeeded; however, the dark mage Mordegon came to possess Carnelian and turned on Irwin, killing him. Carnelian then ordered Hendrik to go after the escaped and kill the Luminary when found. Dundrasil was sacked; the Luminary sent downriver by Jade; and Eleanor killed in another pursuit. Rab was forced into exile.

With none knowing what became of the Luminary, Rab and Jade meet again years later and train together as martial artists, eventually registering for a Masked Martial Arts tournament in Octagonia, where the Rainbough was being offered as the top prize. On the eve of the final matches, Jade goes missing. Rab offers to go with the party to find her.

The party of five is also investigating the disappearance of the Luminary's MMA teammate Vince Vanquish. The orphanage he oversees becomes the starting point for their search, and the children there hint at the discovery of a cave in the orphanage basement. Vince is found in league with the beast Arachtagon, using a serum extracted from the essences of captured fighters to win his matches. Arachtagon turns on Vince and begins to siphon off his partner, but the party challenges him and he is defeated. Arachtagon's hostages are also freed, but still weakened; they recover for the night.

As Vince, now purged of his "secret sauce", and the Luminary stage a tiebreaker match for the Rainbough, Rab and Jade have already taken off with it and headed for Dundrasil. The rest of the party follows behind. There, Rab explains the ritual to send the souls of the dead back to Yggdrasil, and invites the Luminary along. That evening, however, Hendrik catches up to the party. While Jade and the Luminary spar with him, Rab and the others escape. Frustrated by their skill, Hendrik breaks off the attack and vows revenge.

The next day, Rab and the others meet before the ruins to discuss next steps. It is he who informs the party of Mordegon's plans. The Rainbough glows brightly, showing what their objective should be. Rab gives the party the Yellow Orb he and Jade won in the tournament. Meanwhile, Erik hands off the Red Orb he kept. Rab and Jade agree to continue with the Luminary and watch over him.

From this point forward, Rab serves as the party's advisor on the myths and legends pertaining to the quest. Being a noble, Rab also has an excellent rapport with others in power, which allows him to gather intelligence that others in the party may not be privileged to.

After the Fall. Rab makes a pilgrimage back to Mount Pang Lai and Angri-La, where he learns that his former mentor has long since gone. He rushes to the Summit Shrine at its peak and enters a state of deep meditation, seeing a bunny girl, and going through a near perfect life if Dundrasil was never destroyed. When Rab rejects that reality, the bunny girl commends him, revealing herself to be Grand Master Pang. Rab is surprised, and trains with her. The disciples of Angri-La have not then seen their "hermit" in three full days. In the midst of celebrating the Luminary's arrival, the High Lama, a 12-year-old boy wise beyond his years, sends a detachment of monks after him, only to be waylaid by the monsters along the way. Fortunately, a ward cast over the area has kept the worst at bay.

The High Lama reveals more information regarding the sudden disappearance of Grand Master Pang, as well as of Rab's time in Angri-La as something of a dubious legend. Hendrik, now commissioned as a bodyguard in the Luminary's service, agrees to help the Lama find this missing man. The Lama offers to travel with the pair to the summit, and they accept.

At the summit, the party of three finds the hermit withered and pesumes him dead. Hendrik, however, recognises the pendant round his neck, as well as the copy of Ogler's Digest Issue 1 at his side: it is indeed Rab, and they fear the worst for him. The Lama checks Rab out and finds him clinging to life, somewhere in the space between life and death. He also knows a meditative ritual that can send a person's consciousness into that space; and so, the Luminary agrees to retrieve Rab from the Void.

While in the Void, the Luminary meets a grey-haired woman serving as gatekeeper. Grand Master Pang informs him that since the Fall, many lost souls have passed under her watch, but none have returned. In the distance beyond is Rab, who is seen practising the Pearly Gates technique ad infinitum, but not quite perfecting it. Pang then explains the nature of the maneuver and why Rab must continually practise it as he searches for a way to defeat the Lord of Shadows, as Erdwin and his party did centuries ago. To his own amazement, Rab successfully executes Pearly Gates and wishes to return to the world, at first perplexed and overjoyed to see his grandson; but Pang says he is not done yet. She teaches the Luminary his Quadraslash technique, then sets him in a soul-to-soul battle with Rab, enhancing the latter's power so as to test the former. The Luminary prevails, and their joint training is complete.

As the Luminary and Rab prepare to leave the Void, Mordegon penetrates the dimensional barrier in an attempt to eliminate them all with dark tree roots. Pang struggles to hold him off, but in the process, teaches the heroes their ultimate Pep Power, the Solar Flair. The blast of holy energy drives Mordegon's projection out of the Void, but expends all of the pair's stamina. Back in the real world, Rab and the Luminary are taken to rest in Angri-La the night.

The next morning, Rab and friends set off for Arboria, each with renewed vigour as they continue to look for their allies and a means to bring Mordegon down.

Rab is very much a jack of all trades, but a master of none. He starts off with access to the mid-level healing spells, buffs, and debuffs, plus the Crack and Zam families that Veronica does not fully access. As such, the player may wish to focus on magical might, magical mending, and MP through his skill trees. He pairs well with Jade, infusing her might with the dark elements of his magic when pepped up. With the Luminary, he has access to several debilitating abilities that could prove handy against mobs.

Rab in the Void.

Rab and Jade in Phnom Nonh.

Rab sets up a dark spell. 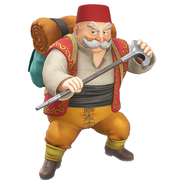 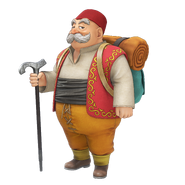 Retrieved from "https://dragonquest.fandom.com/wiki/Rab?oldid=174283"
Community content is available under CC-BY-SA unless otherwise noted.