Ramia (AKA Empyrea and Great godbird, formerly Lamia) is a character in the Dragon Quest series who is a gigantic bird-like creature with the power to travel between worlds.

In her first appearance, she is depicted as a gigantic bird-like being of godly majesty and grace, resembling a white peacock.

When first encountered at the Leiamland shrine, Ramia is only an egg being guarded by a pair of twin sisters. In order to hatch the egg, the Hero and his/her party must gather the six orbs from around the world and place them on pedestals surrounding it. Once hatched, Ramia serves as the series' first aerial transportation, allowing access to such places as Baramos' Lair and the Dragon Queen's castle in the central continent. However, Ramia cannot travel to Alefgard, nor can she land where the player cannot walk, such as high mountains and bodies of water.

The theme that plays while riding Ramia is Heavenly Flight.

Speaking to her attendants after her hatching reveals that Ramia is a servant of the Goddess and will only allow those pure of heart to ride upon her, cementing the Hero's destiny as a savior. The twins further state that Ramia has incarnated many times in the past, aiding heroes in times of crisis.

Empyrea's first encounter with the party was when they traveled to the World of Darkness in search for her advice. There they discovered that her egg was threatened by a monster called Gemon, and thus she has been forced to attack the nearby village of Empycchu.

The party agreed to infiltrate the Godbird's Eyrie where the egg was being kept hostage, but during the battle to recover it, Gemon, realizing that Empyrea betrayed him, sacrificed himself to destroy the egg. Empyrea's child, who died before hatching, appeared as a spirit and decided to aid the party in their quest, bestowing them the power to fly through his solidified soul. This allows them to reach places in their world inaccessible by land or sea.

Empyrea plays a major role in the game's final battle. Not only does she recover the Godbird Sceptre, allowing the party to invoke the power of the seven sages' spirits to break the barrier protecting Rhapthorne, but she also carries them on her back throughout the entire fight.

Following Rhapthorne's final defeat and death, Empyrea carries the party back to Castle Trodain, where King Trode and Princess Medea are waiting for them. Afterwards, she prepares to depart for another world. When Trode asks her about the curse, she tells him that, with Rhapthorne gone, he, Medea, and Trodain will return to normal shortly. Trode then tells Empyrea to take care, but then takes it back, stating that he should not be telling a god to take care. Empyrea reveals to the group that she is not a god, nor is Empyrea her real name, revealing that it was the name given to her by the seven sages and that her real name is Ramia. She then bids farewell to everyone and leaves for another world, with her child following right behind her.
Thou hast defeated the spoiler.

Ramia is not normally available in the game, being given away as part of a Nintendo Power contest during the game's debut year. Since this contest has ended, cheating devices and ROM hacks are the only way to gain access to the phoenix.

Empyrea makes an appearance in Joker; once available through WiFi. Obtaining her is impossible unless the player uses a cheating device like Action Replay.

Empyrea makes her return in Joker 2 as a character heavily involved the main story. After the player defeats Gemon in Cragravation, Empyrea appears and, in her golden bird form, comes forth to talk to the player, Melonie, and Captain Mayday. After hearing their plight, she initially tells them that escape is impossible, for she serves only one master. However, she notices the Mysterious Medal in the player's possession and immediately agrees to aid them, so long as they awaken the Great One.

Once the player succeeds in reawakening the Great One, and talking to Rory Bellows, the player and the crew escape the island on her back, and take part in the True Monster Scout Challenge at the nick of time.

Aside from this appearance, Empyrea is key in two monster recipes; Orochi and Great Godbird. Synthesizing her with Wormonger, Bjorn, and Missing lynx result in Orochi, whereas Great Godbird requires her to be fused with a Dragovian lord. The player does not need to worry about using Empyrea or the four other giants freely, as they respawn after being synthesized away into different monsters.

Ramia appears alongside her Empyrea design, and both can be in the same party. She is a rank SS, size-three monster, and was available in 2012 via a limited distribution through Mcdonalds fast food restaurants in Japan along with Captain Crow. One year later, the monsters were made available in-game through an official update patch.

Empyrea is first hinted at by Jessica telling the party that a "friend" asked her and Yangus to investigate why the monsters are attacking humans. She appears following the defeat of Velasco and the King Hydra, where she rescues Luceus, Aurora, and their companions from the destruction of Nexus Island. After taking them to Arba Castle, she reveals that she was the one who brought Yangus, Jessica, and the others to Arba to stop Velasco and Shadroth.

Empyrea is hinted throughout the game's climax due to a feather after Lazarel, Theresa, and their allies are saved from the Pinnacle of Peace's destruction. After Fractos is defeated, she appears telling the party to take the Cup of Kings, now bathed in light again, and fulfill the prophecy. 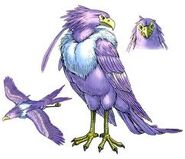 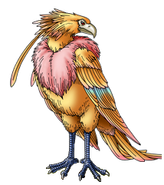 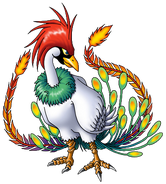 Ramia's artwork for Terry's Wonderland 3D.
Add a photo to this gallery

Retrieved from "https://dragonquest.fandom.com/wiki/Ramia?oldid=192652"
Community content is available under CC-BY-SA unless otherwise noted.