Red (ゲルダ, Geruda) is a thief and a pirate who was an old mate of Yangus in Dragon Quest VIII. An NPC in the original PS2 version, Red gets upgraded into a playable character in the 3DS remake of VIII.

In combat, Red puts her skills in thievery to good use, stealing both gold and treasure from unsuspecting enemies, and can wield knives, whips, and fans as weapons.

Red is a woman with a slender athletic build and tanned skin. She has blue eyes and wears her dark grey hair in a high, messy ponytail and some of the fringe framing her face. Her features are angular and she is rarely seen without a scowl on her face. She also wears silver hoop earrings on both ears, as well as a metal choker around her neck with a ring on it. The majority of her outfit is colored red, like her namesake. She wears a red leather tube top with straps around her left shoulder, red sleeves held up by metal armbands around her biceps, red bikini bottoms, red leather boots that reach over her knees, and metal bands around her thighs. Around her waist, she wears a fur wrap that covers most of her lower body and a leather belt that holds her dagger in a scabbard. Her top and boots have various straps and buckles on them, however in some illustrations, the straps on her top are missing. In the 3DS version, Red's outfit is less revealing as she wears a pair of red short shorts instead of bikini bottoms.

As a playable character, she gains access to various costumes that can change her appearance.

Red isn't the type of person to keep promises if someone else breaks a previous commitment, as shown when she refuses to give Princess Medea back until the gang go into the Swordsman's Labyrinth and retrieve the Venus' Tear for her.

Red buys Princess Medea and the wagon from Dodgy Dave in Pickham, only returning them to the party in exchange for a jewel, the Venus' Tear, found in the Swordsman's Labyrinth. When the party gets the jewel, but before going back to Red's place, Yangus reveals that he tried to get that jewel earlier in hopes of impressing Red, but gave up due to the difficulty.

When visited during the search for the Moonshadow harp, Red mentions being unfamiliar with it, and suggests disappointment that Yangus only came to seek help.

Later on, when the party must find the treasure of Captain Crow, they meet her with the same intentions. They find their way through the Pirate's Cove and Red find herself face to face with Captain Crow, only to be knocked unconscious. The Hero's party defeats Crow and wins the Illuminated Sea-chart, which Red had no apparent interest in. She then left to return to her home southwest of Pickham.

Before the party takes on Rhapthorne, they can visit her to obtain the Flail of fury on the condition that Yangus returns it to her after he's defeated Rhapthorne. Everyone but Yangus picks up on the true meaning of the gesture, and when Angelo says it out loud, Yangus and Red visibly blush.

Red's involvement in the story is the same as in the PS2 Version up until the after Captain Crow's defeat. She expresses disappointment with merely find a map, but then decides to join the party figuring that she'd find some treasure along the way.

Whenever the party enters her home, she takes the time to relax on her chair and is unable to be put into the lead at that point. While the dialogue is different to reflect her expanded role in the game, she still gives Yangus the Flail of Fury after the Black Citadel rises.

Though her presence has minimal changes to the story elements from the original, several moments play out differently with her:

Young Yangus and the Mysterious Dungeon

This Japan-only game takes place 20 years prior to the story of VIII and explores Red's relationship with Yangus. 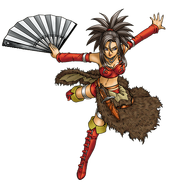 As she appears in Dragon Quest Rivals 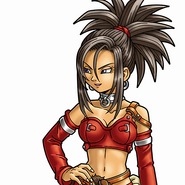 Red, as seen in Dragon Quest of the Stars