Such a pity.
— Rhapthorne, usually before or after defeating an opponent

Rhapthorne conquered the World of Darkness and created a gate that bridge to the World of Light in preparation for his invasion. Empyrea, who can move freely between the two realms, learned of these intentions so she enlisted the help of the Seven Sages to stop him. They eventually sealed him inside the Godbird Sceptre using each of the Seven Sages' essence which should preserve the seal so long as an heir to each of the seven bloodlines exist in the world. Dhoulmagus learned of Rhapthorne's existence through one of Rylus' grimoires and seeked to attain the latter's power. Rhapthorne took this chance to enslave Dhoulmagus to break the seal for his return.

Before the game's events, Rhapthorne was sealed inside the Godbird Sceptre and locked inside Castle Trodain. When Dhoulmagus stole the Sceptre, Rhapthorne possessed him and used him to kill the heirs of the Seven Sages, starting with Master Rylus, who just completed his elixir after scolding his former apprentice.

In the aftermath of killing Golding, Dhoulmagus was injured and retreated into the Dark Ruins to recover. As a safe pre-caution, he enchanted the ruins with a dark aura rendering any wanderer lost in an abyss. In order to get in, the protagonists used a newly charged Sun Mirror to emit a condensed burst of light that destroyed the aura. When the party entered the depths of the ruins, they cornered and defeated Dhoulmagus. Not knowing of the existence of Rhapthorne despite the murals showing him and his story, (Though only Angelo knew, as evidenced by the party chat) the party thought with the demise of Dhoulmagus the curse would be lifted. Despite Dhoulmagus's efforts to rest and fight (Even getting a power boost from Rhapthorne), he is defeated, but the curse is not lifted. Unsuspectingly, Jessica picked up the Sceptre and became possessed by Rhapthorne.

The protagonists wake up the next day to find that Jessica has gone missing. They begin searching for her and eventually find themselves in Arcadia. When the player enters Dominico's mansion, she is just about to kill him. Jessica says that she doesn't feel like killing all three of them so she leaves, but not before warning Dominico to build a better magical barrier. The protagonists eventually realize that she is possessed. Later, she attacks again, with her learning that David is the heir that needs to be killed, and the player has to fight her. When she is defeated, the Sceptre is knocked out of her hand by Dominico's spell, freeing her from Rhapthorne's control. However, Sir Leopold, Dominico's dog, picks it up in his mouth and is possessed by Rhapthorne. Rhapthorne, through Sir Leopold, then kills David and leaves town, heading north.

Rhapthorne next targets Marek, a doctor in the town of Ortusk, commanding a pack of Hellhounds to attack him. However, he realizes that even though he has sage's blood, Marek is not the one he is after and decides to target Marek's mother, Marta, who is the real heir to one of the seven sages. Despite Marta protecting herself from the Hellhounds he sends after her, Rhapthorne manages to kill her in a fit of rage after being temporarily blinded when Marta throws nook powder in Sir Leopold's eyes in order to save Marek, who Rhapthorne was using as a hostage.

The Lord High Priest is then shown to have collapsed, but is still alive. However, Marcello, Angelo's half-brother, enters the room, confiscates the scepter, and has the party framed for attempting to murder the Lord High Priest and sent to Purgatory Island. Later, Marcello is seen holding the scepter, where it is revealed that he killed the Lord High Priest. Vines suddenly spring out of the staff and try to take over Marcello, but he stabs himself to resist becoming possessed. After escaping from Purgatory Island, the party confronts Marcello at the Holy Island of Neos and defeats him.

Resurrection of the Black Citadel

Once the heroes gather all of the seven orbs, they confront Rhapthorne alongside Empyrea, breaking his barrier of darkness and defeat him, lifting the curse on Trode and his daughter, Princess Medea.

Rhapthorne appears as a Legacy Boss, obtained after completing Quest #179 (or received at special events).

1st Turn: Cast Gritty Ditty and Life Fource on your party while the fighters use Falcon Slash.

Remaining Turns: Continue to Falcon Slash with fighters. Healer can either attack to drain MP or heal as needed. Paladins can intercept hits and return spells with Bounce.

Rhapthorne is a powerful one-spot monster that can be synthesized with a Dhoulagus and a Mortamor or a Nimzo. Rhapthorne II is a three-monster-spot monster, but is incredbly useful. Also, he can unleash powerful attacks which can dominate any competition. 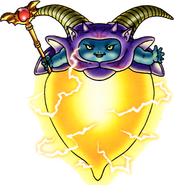 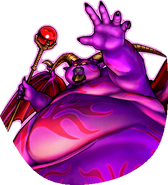 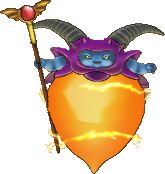 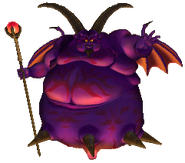 Rhapthorne 2's 3DS model.
Add a photo to this gallery

Retrieved from "https://dragonquest.fandom.com/wiki/Rhapthorne?oldid=210131"
Community content is available under CC-BY-SA unless otherwise noted.