Rigor Mortex is a monster that was created to overpower the ruler of the island, Leonyx. It reflects the desires of whatever it faces, according to its creator, Zelham. This caused it to reflect his greed and hatred and turn on all of humanity.

This monster searches eternally for anybody that understands 'real strength' and it 'becomes one' with those that simply do not understand. When it is finally encountered in the Dark World, it reveals it wants become one with the player and escape from the Dark World so that it can destroy the outer world.

In Dragon Quest Monster Super Light,he appears as the main villian.He is the one who drive monsters crazy.

Rigor Mortex uses incredibly powerful moves such as Frizz Cracker and C-c-cold Breath, and foils strategies with Unnatural Order, not to mention he attacks twice. It bears bouncer as well, causing all magical-based attacks to bounce right back at the attacker. Combined with its large sum of hit points and unsurpassable defense, this monster will take quite a lot of attacking to defeat and has the ability to attack your entire party.

Rigor Mortex is a size three monster and superboss in Dragon Quest Monsters Joker 2, the main antagonist of said game and the source of practically all of the conflicts that torment the inhabitants of the island. It was created by a man named Zehlam to become more powerful than even the legendary warrior and ruler of the island, Leonyx. Zehlam was betrayed, however, by the pure evil Rigor Mortex had absorbed from the island and its inhabitants.

It is found in the Dark World after all four "dark crystals" are broken by the player, in a giant room with stained glass past a room filled with cogs. Once it is encountered, it speaks philosophically to emphasize its evil demeanor and truly shows no mercy in battle.

After its defeat, you will notice a pillar and skeleton behind it. The pillar is marked with the 'special' family mark, however unlike the other pillars, it is never used to traverse to the Light World, thus rendering it unknown as to what it is used for. If you speak with the skeleton behind it, it is revealed to be none other then Zehlam himself. He carries a note that reads as follows: 'My name is Zehlam... I was betrayed... by my own hand... Rigor Mortex was a mirror... It reflected our all-too humans desires... I was betrayed by my own hand...'

It is a synthesizable monster, however requiring 2 Captain Crows renders most players (outside of Japan) unable to create it partly because of the lack of players near their location to trade/scout and partly because Captain Crow is a 1-time monster. However, if you have two games and two devices, you can duplicate Captain Crow. Rigor Mortex is the most difficult monster to synthesize because of the 2 monsters it needs in order to be created, Leonyx and Zenith Dragon.

Rigor Mortex once again appears in this game, still being a three-space X rank with bouncer that can attack the entire party. However, since battles can have four monsters on each side, Rigor Mortex can finally get support from a one-space monster. In order to synthesize Rigor Mortex, you once again need Leonyx and Zenith Dragon, but the way to synthesize them has changed once again. 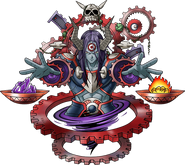 Retrieved from "https://dragonquest.fandom.com/wiki/Rigor_Mortex?oldid=182497"
Community content is available under CC-BY-SA unless otherwise noted.