Robbin' 'ood is a character who acts tough to his enemies, but is kind to his men. When he is defeated, however, he will beg for forgiveness, claiming he'll never steal or do evil again.

Within the tower, Robbin' 'ood attempts to thwart the hero by opening a trap door, which the hero's party falls through. Upon returning to the previous location, the hero finds he has vanished. However, after leaping off the edge where Robbin' 'ood had been standing, the hero finds him in the tower several floors below. This results in the first combat with him. After the battle, the hero acquires the king of Romaly's crown.

The second appearance of Robbin' 'ood is in the Kidnapper's Cave. He has kidnapped a couple from the town of Baharata and is holding them for ransom within the cave. Upon freeing the imprisoned couple, the hero is confronted by him and forced to fight him a second time. After his second defeat, Robbin' 'ood pleads for mercy, claiming that he will change his ways.

Robbin' 'ood's final appearance is in the castletown of Tantegel. He claims to have changed his evil ways and acts as a typical NPC. He provides the hero with information about the location of the Sunstone.

Robbin' 'Ood appears as the boss in the DLC Tablet Treasure Hunt in the Nintendo 3DS Version of Dragon Quest VII. Robbin' 'Ood cannot be tamed and thus is only encountered in the tablet.

The Staff of resurrection is given as a reward for defeating him the first time.

In a callback to Dragon Quest III, Robbin' 'ood has once again seized a shipment of proper pepper, this time destined for Puerto Valor. A chef in the casino hotel has sent the Luminary to get it back.

The name is a pun on the fictional charter Robin Hood who carried a bow and arrow and wore green.The robbin' is based on robbing-when someone steals (robs) something.

In Japan, the character is named after the robber Kandata from the story of The Spider's Thread, in which a bandit is given the chance to escape his imprisonment in hell by climbing a single thread of spider silk. 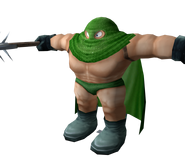 Model from Itadaki Street Special
Add a photo to this gallery

Retrieved from "https://dragonquest.fandom.com/wiki/Robbin%27_%27ood?oldid=195585"
Community content is available under CC-BY-SA unless otherwise noted.