As an elf, she had the rare gift of shedding ruby tears and thus, she faced constant harassment from humans who wanted to add to their wealth. Ironically, as the magical rubies were filled with Rose's most powerful inner desires, as soon as the gems touched their hands they shattered, so all their work and misdeeds in kidnapping and beating Rose were for nothing after all.

Psaro, a prominent demon, met and fell in love with Rose after rescuing her from such an attack, and sought to protect her. To this end, after naming her "Rose" in honor of his cherished hometown of Rosehill, he took her to said village and built in it a small fortress for her far away from human grasp, installing a powerful watchman dubbed Sir Roseguardin to keep her safe in his absence, as well as cleverly hiding the passage for her chambers behind the use of a Flute of Revelation. Psaro paid frequent visits to Rosehill in order to see Rose; he told her of his plans to destroy humanity to free the world for demons, and continued on with righteousness in spite of her pleas to stop and try for coexistence. His plans went against her kind and compassionate nature, but she could see only the good in Psaro and still hoped he might ultimately be dissuaded.

Before this ever had a chance of happening, Aamon secretly had Rose murdered, so that Psaro would be driven mad by her death and use the Secret of Evolution on himself. This would allow Aamon, his closest retainer, to steal the secret for himself and become the new master of monsterkind.

In the remake of Dragon Quest IV, there is an additional chapter, in which the party uses the Yggdrasil flower to revive Rose from death. Upon seeing the transformed Psaro, her desire filled ruby tears reverse the effects of the Secret of Evolution, and after informing Psaro of the true mastermind behind her death, he decided to finally abbandon his previous plans of eradication and joined the Chosen to take down Aamon once and for all. With the world at peace, the two were free start their lives together in the newfound peace, quietly retiting.

Rose and Psaro appear in one of the three possible versions of Reaper's Peak in the DS and mobile phone versions of the game. She is sitting in the Hero's house across from Psaro, and is overjoyed to be with Psaro at last, and bursts into tears.

Rose appears in her tower as part of the second IV location players can visit through the Echo Chamber. Here, she is being chased by a cursed Sir Roseguardian, whom the player stops it through battle. The Flute of Revelation was broken in the tussle, however, and a revelatree branch is needed to repair it. Once this task is completed, the elf is brought to tears by the player's charity. 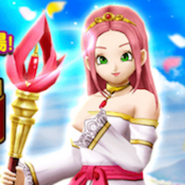