Rubiss is a creator Goddess who appears as the principal deity in several Dragon Quest games.

Rubiss isn't mentioned in early versions of Dragon Quest, but she is mentioned briefly in the mobile phone remakes by the Sage in the Sanctum, who bestows the Hero with the Rainbow Drop, as well as the Sage in Cantlin, who tells the Hero about the location of the Mark of Erdrick. The two sages have the exact same dialogue, as many of the citizens of Alefgard share dialogue with other characters of the same NPC class in the aftermath of the Hero's victory over the Dragonlord.

The player can communicate with Rubiss by sailing to a small island shrine south of Midenhall. When presented with the five collected sigils, She will speak to the three cousins telepathically and give them an Eye of Rubiss to dispel wicked illusions.

Being her first appearance in the series, Rubiss is introduced to players as a protector Goddess who operates through her chosen ones, rather than directly intervening in world affairs. The fondness and loyalty to which she speaks of Erdrick elevates the character from but a mere ancient folk hero to a savior to whom the very gods are indebted. This relationship would be further expanded upon in the third game, especially the remade versions.

In Dragon Quest III, Rubiss was overpowered by Zoma, and then cursed. Rubiss is held prisoner on the top floor of the Tower of Rubiss. The heroes must use the Faerie flute in front of the statue there in order to free her. When she is freed, she gives the players the Sacred Amulet, which is one of the 3 items needed to obtain a Rainbow Drop.

Rubiss is the mountain spirit the people of Weaver's Peak worship, and lives in an underwater shrine the heroes can visit only after they acquire Lorelei's harp and can traverse the Undersea. Her palace is relatively close to the Isle of Murdaw.

In the beginning of the game, she possesses Tania to speak directly to the Hero that he must reunite with his companions after the failed assault on Murdaw's Keep in the game's opening sequence.

Rubiss is a major character in the game, being the guiding voice that directs the Builder in each chapter. Presented in a more humorous light than in past games, the goddess is frequently taken aback by the blunt and impatient craftsman's attitude. She warns the player that they are not a hero, and expressly forbids them from challenging the Dragonlord: their task is solely that of restoring the land and settlements of Alefgard.

Prior to the game's opening, her influence upon the world is weakened by the Dragonlord sheathing the sky in darkness as Zoma once did. Only the Builder can hear her voice throughout the game, and her words cannot reach them at all in the final chapter of the game until a pious princess' prayers counter the malefic mist. Once the castle of Tantegel and the legendary arms are restored, Rubiss praises the Builder and declares their work complete--she states that she and the revived Alefgard will wait for a new hero to appear to slay the Dragonlord. When her divine judgement is questioned, she reaffirms that the builder is forbidden from carrying out an assault on Charlock Castle and ceases communicating with the player.

During the battle with the Dragonlord, Rubiss will intervene and counter the maniac's magical seal by teleporting the friends the builder has made along their journey into the fray to deliver materials, food, and medicinal herbs before spiriting them away to safety. When the Builder proves victorious, Rubiss admits she was mistaken, and thanks the little architect from the bottom of her heart before musing that the human spirit is something beyond even her reckoning.

Rubiss makes an appearance during Chapter V of the Dragon Quest III event in the game. She introduces herself as Rubiss, explaining that she is the creator of Alefgard and that she has been sealed way by Zoma. Before leaving, she thanks the player in advance for their efforts against Zoma.

This is the first time Rubiss' official illustration has been shown and used in a game. Unlike her manga illustrations, she is shown with large, white angelic wings that matches her dress. Her hair is crimson red, her eyes are light blue and she also has long elven ears that allude to her manga designs. In her hands, she holds a deep blue pearl-like orb.

A three-volume series of novels revolving around the goddess Rubiss before the creation of Alefgard was released in Japan in 1990 called Dragon Quest: Legend of Rubiss. Cover art and illustrations by Mutsumi Inomata. 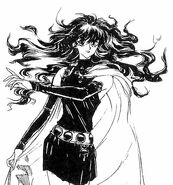 Rubiss in an illustration from CD theater Dragon Quest II 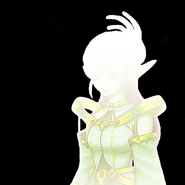 As seen in Dragon Quest of the Stars

Retrieved from "https://dragonquest.fandom.com/wiki/Rubiss?oldid=190009"
Community content is available under CC-BY-SA unless otherwise noted.