A boy raised in the wild, full of innocence and warmth. Despite his youth, he has incredible survival instincts, and can run circles around the fiercest of monsters. Little is known about his background.
— Dragon Quest VII game manual

Ruff (known as Gabo in Dragon Warrior VII) is a playable character in Dragon Quest VII. He is a White Wolf that was turned into a human.

Ruff is a small, young boy with long unkempt hair. He wears a blue cloth that is fixed like a cape and sackcloth shorts held together by a rope.

Though depicted without a mount in most artwork, Ruff rides the grey wolf that befriended him in the 3D remake, and is never seen walking under his own power. As Ruff had been a wolf himself, he is first met running on all fours as he battles the hackrobat.

His grey wolf mount is female, and has dark fur from the crown of her head back to the upper half of her tail, with lighter fur covering the lower portion of her body. Should Ruff assume a vocation with headgear, she will wear the same as adapted for her. She is shown to be obedient to him during the past events of Al-Balad, when she is told to be gentle with the remains of those killed by monsters.

When the player gains Ruff as a party member in the beginning, he is unable to communicate because he was originally a White wolf. However, due to a spell by Hackrobat, he is able to speak. Maribel says that he is "quite the talker".

Ruff carries over traits from being a White Wolf, including agility and enhanced senses. He is a fast runner on two feet. He can also bite an enemy and paralyse them, however this was only shown after the battle against Hackrobat and not since.

He is constantly looking to eat. Should the Hero talk with him, Ruff almost always asks for food. He also loves competition and fighting. He looks for any chance to prove himself.

Ruff doesn't understand complicated human behaviour such as courtship and tact. During the quest in Greenthumb Gardens, Ruff speaks of his confusion concerning Carraway and Lavender. At Alltrades Abbey, Ruff asks Eustace why his legs are so short. He appears to have a precocious crush on Jacqueline, as he becomes dismayed when the party returns to the present to find that an old man has taken her place at Alltrades Abbey in the present.

In the 3DS remake, if the player decides to look in a mirror while Ruff is the first character in the party line-up, he will admire his nose, state that he licks his face clean every morning, find some leftover breakfast around the corner of his mouth, express confusion at seeing his own reflection, have fun watching his movements in the mirror, comment on how short his tongue is as a human compared to when he was a wolf, and say that mirrors don't taste nice to lick.

Ruff was born to a white wolf who just finished fighting Hackrobat. The fight injured her to the point where after she gave birth to him, she died.

Ruff was taken in by a farmer in the town of L’Arca and was chained to the wall for both the farmer's protection and the comfort of Ruff. However, Hackrobat came to the town. To spite the White Wolves, he turned all of the residents of L’Arca into animals and vice versa. Ruff is transformed into a human. The chain, which was probably comfortable in his wolf form, was now choking him.

The hero, Kiefer, and Maribel reach L’Arca after Hackrobat's spell. Inside a shack, they find Ruff chained to a wall by his neck. The Hero and his party is unable to free him.

After getting the woodcutter from the present, he frees Ruff and he runs out of the town.

As the party begin to fight Hackrobat, Ruff arrives and bites the monster. The party, along with the woodcutter, engage the monster in combat. The party defeats Hackrobat and Ruff bites him again. With this bite, Hackrobat is paralyzed. He realizes that Ruff is actually a white wolf who was caught in the spell that he cast in L’Arca. As a final spite, Hackrobat casts his final spell on him. This spell curses him to remain in human form forever. The party reseals Hackrobat in the coffin again, undoing the spell in L’Arca.

After the battle is finished, the party thanks the boy, who identifies himself as Ruff. They are surprised that he is able to speak but he can only communicate in simple sentences like "Gabo go" and growling.

The party returns to L’Arca to see the spell undone. They visit the farmer who took care of Ruff to find his disbelief that the wolf had disappeared. Leaving the shack, they see Ruff and his wolf friend outside the building. The woodcutter understands that he wanted to thank the man for his kindness. It is in this moment that the woodcutter decides to adopt Ruff.

They party, along with the mother wolf, the woodcutter and Ruff, return to the portal and step through it, finding themselves back in the Estard Ruins. The woodcutter tries to bring Ruff with him but he refuses, saying that the seal on Hackrobat could have only been broken on the outside and that whomever broke the seal was very powerful. Therefore, he wanted to defeat the evil that broke the seal in Grotta del Sigillo. The woodcutter acknowledges this request and allows Ruff to go with the party.

The party goes to Grotta del Sigillo in the present and returns to the place where the monster was previously sealed. They hear a voice telling them to run away or face the consequences. Instead, they opened up the coffin once more. Hackrobat is revealed to be in a human form now. He figures that it is punishment for what he did before. He recognizes the party and wants to make up what he did to Ruff in the past. He tries using magic to return Ruff to his wolf form but he fails. Instead, he makes him more human and gives Ruff the power to speak the human language. Ruff is ecstatic that he is finally able to communicate with the party. Hackrobat also gives the party a Blue Fragment to the party. The party leaves Grotta del Sigillo to continue on their adventure.

When the player obtains Ruff after L'Arca, he starts at level 1. Therefore, it is advisable to keep him in the back until he gains levels. After level 2, he gains Bark which will allow him to participate in battle. As he gains levels, he can move to third position until he is on the same levels as the rest of the party.

Ruff is naturally fast. Attacks miss him more often than the rest of the party. When he reaches the same levels as the party, he will usually attack first. He will also gain strength in bounds so that when he reaches certain levels, he is doing significant damage. When he learns Rip and Howl, he will become more adept in defeating enemies.

Ruff can equip light armor and furs. He is the only one who can wield claws and fangs. Much like a martial artist, Ruff's attack will actually goes down if he equips certain weapons such as swords. He is also capable of equipping boomerangs.

As Ruff is the only party member besides the Hero to stay in the party throughout the duration of the game, he is best made to learn classes that increase his strength, like Warrior and Martial Artist. It would also be a good idea for him to become a Priest, as both the Hero and Maribel learn healing magic naturally. If the player wishes to learn advance classes, Ruff and the Hero are the best bet.

Mutsumi Tamura (Japanese) - Twins Kings and Ending of the Prophecy 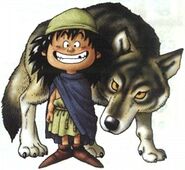 Gabo's artwork for the PlayStation version.
Add a photo to this gallery

Retrieved from "https://dragonquest.fandom.com/wiki/Ruff?oldid=173101"
Community content is available under CC-BY-SA unless otherwise noted.