It has been suggested that this article or section be merged with Dragonlord. (Discuss)

Ryūōis a character from the Dragon Quest manga series, Emblem of Roto. His evil form, Dragon Lord, is later revealed in Dragon Warrior.

Ryūō is the son of the Empress Dragon and thus became the king of dragons. He is later tricked by The Demon Lord into following his guidance and performing evil deeds that obstructed Arus and his friends.

After realising that he had been deceived, Ryūō set out to defeat Jagan along with Arus and thereby forcing Jagan to surrender Tantagel castle which he then took over.

When the events of Emblem of Roto conclude, Ryūō becomes the infamous Dragon Lord and the main antagonist of Dragon Warrior. 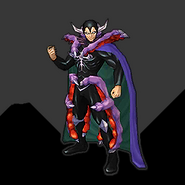 As a monster in Dragon Quest of the Stars
Add a photo to this gallery
Retrieved from "https://dragonquest.fandom.com/wiki/Ry%C5%AB%C5%8D_(Emblem_of_Roto)?oldid=189499"
Community content is available under CC-BY-SA unless otherwise noted.