The sacred armour is a recurring suit of armor in the Dragon Quest series. It recovers the wearer's HP at the end of each turn in battle.

Sacred armour has 75 defense points and recovers 30HP by the end of the turn. Both Hero and his son can equip it. It can be bought from King Dominicus for 28 Mini medals and is also found on the final board game.

Given to the party in exchange for donating a total of 60 mini medals at King Medford's castle, the Sacred armour recovers 25 units of health each turn, and provides +75 defense and +55 style.

The sacred armour has a defense bonus of +75, a style bonus of +55, and recovers 50 HP per turn. It can be equipped by the Hero, Maribel, Sir Mervyn, and Aishe. The armour can be purchased as a prize from the Buccanham Casino for 20,000 tokens.

In the 3DS version, there is an upgraded version called the sacreder armour, which recovers 75 HP per turn.

The sacred armour has a defense bonus of +64 and it recovers 30 HP per round. Only the Hero and Angelo can wear it or it can be sold for 7,750 gold.

It is obtained from Princess Minnie upon giving her a total of 68 mini medals. In the 3DS version, it can be upgraded into the über sacred armour in the Alchemy Pot, which increases its defense bonus, but does not increase the amount of HP recovered.

This armour raises defence by 46 points and heals 25H at the end of the turn. Vocations which can equip sacred armour are: Warrior, Thief, Minstrel,Gladiator, Paladin, Armamentalist and Luminary. It can be upgraded through alchemy into Sacrosanct Armour (has 53 defence points, still heals 25HP, the same classes can equip it) using Ruby of protection and a Life ring. 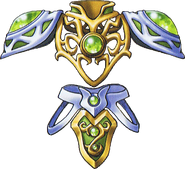 VII artwork.
Add a photo to this gallery

Retrieved from "https://dragonquest.fandom.com/wiki/Sacred_armour?oldid=163125"
Community content is available under CC-BY-SA unless otherwise noted.