The Sage is an advanced vocational class in the Dragon Quest series.

Proficient with both weapons and magic, they are often the most powerful combatants in their respective games.

To become a Sage, a character must have reached level 20 (a basic requirement for changing vocation) and met only one of the following:

In remake versions, having a personality that favours intelligence growth is recommended as well.

In order to become a Sage, the party member must first master the Mage and the Priest classes.

In order to become a sage in VII, the party member must first master both the Priest and Mage classes. As a Sage, that particular party member's spells will cost less MP. The higher tier the Sage is, lesser MP is expended for spells.

The Sage vocation is obtained after completing Quest 115.

Sages have the unique skillset "Enlightenment", and can also use skill points to learn Boomerang, Bow, Wand and Shield skills. Their Coup-de-Grace is "Spelly Breath," which recharges a portion of their MP.

Mages and Priests should look to invest skill points in Enlightenment for the boosts to Magical Might, Magical Mending, Max MP, and the MP Consumption drop. This will boost both the effectiveness of their spells and the ability to cast many spells for longer periods of time without having to return to an inn or use an item. 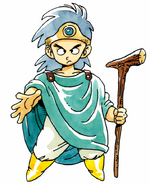 Female sage in Dragon Quest III.
Add a photo to this gallery

Female sage in Dragon Quest III.
Add a photo to this gallery

Male sage in Dragon Quest III.
Add a photo to this gallery

Retrieved from "https://dragonquest.fandom.com/wiki/Sage?oldid=177265"
Community content is available under CC-BY-SA unless otherwise noted.