Start a Wiki
watch 04:15
'Dragon Quest 11' Beginners Guide- Serena
Do you like this video?

Serena is a character from Dragon Quest XI. She is capable of using recovery, wind and defensive geared magic, and wielding wands and shields or a spear in battle. She plays a small lyre.

Serena is a young woman with violet eyes and long blonde hair pulled back with a green hairband. She wears a green kirtle over a white dress, an orange skirt with a silver buckle around her waist, and purple shoes worn with orange socks. She also wears a pair of blue earrings and blue pearls around her neck.

She is a neat and tidy beauty. Although she is calm, laid-back, and compassionate, Serena is also slightly hapless and causes worry for her older sister Veronica.

When Veronica is taken to the Cryptic Crypt while steaming in Hotto, Serena soon goes after her. Veronica, however, has found a way out on her own and goes back to town. Realising that her sister is missing, Veronica scours the town for information, but hits a wall because of her apparent youth. She has to find other help to get the answers she is looking for.

Though monsters are mucking about the place, Serena is largely ignored. Whether she was lost looking for Veronica or tired from a long journey is not known, but she is found by the Luminary and Erik, taking a nap near a holy font. Seemingly oblivious to her present situation, Serena is shocked when confronted by her older sister. At first, she doesn’t recognise her sister‘s younger looks. Veronica, brash and fiery as ever, explains that her appearance was a side-effect of Jarvis’s extraction magic. After a brief spat, both sisters remember their mission, and continue forward with the two men.

As the four approach the main hall of the tomb, they overhear a conversation between Jarvis and his lackeys, the former berating the latter. Suddenly, they are spotted, and Jarvis decides to come after Veronica again. This provokes the rest of the party to engage him. Upon being vanquished, Jarvis gives a final warning of what is to come. The party is now resolved to figure out who this “Lord of Shadows” may be.

Upon returning to Hotto, the party gathers more clues to continue on its journey. At the inn, Serena, and her sister Veronica, swear an oath to the Luminary, and join his party.

When the party reaches Gondolia, they happen upon two teenage boys while touring the city for a way to gain access to Sylvando's ship when the Doge Rotundo closes off the easiest route. As they approach the pair, the elder, Benigno, explains that the younger, Placido, has no voice. Serena examines the latter, finding that he is cursed. She proposes using some birdsong nectar to dispel the curse. Coincidentally, she has all the ingredients to make it, save for pure water. Benigno then tells the party of the one place that may have said water: the Grotta della Fonte to the west of the city. The party travels there, where Serena collects enough water to make the remedy on the spot.

As they return to Gondolia, soldiers from Heliodor attempt to capture the Luminary in a late-night ambush while Serena sets out to cure Placido. She succeeds, restoring the boy‘s voice and allowing him to explain what happened to his father. Erik is captured during the raid and used as bait after Jasper spars with them. Sylvando pulls the ship from harbour, allowing the party to make its escape. A frustrated Jasper sends a Tentacular to slow them down, but the Doge sends merchants to fire upon it as cover, a gift of thanks to the heroes.

For most of the journey thereafter, Serena serves as a capable (if slightly daft) voice of reason and foil to her older sister, using her priestly knowledge to provide insight when needed as well as to heal the afflicted of otherwise impossible ailments.

When they reach Yggdrasil, the party is attacked by Jasper and King Carnelian, possessed of a dark aura. They are unable to penetrate it, and nearly wiped out. Mordegon surfaces and destroys the World Tree in a massive blast; but before they are consumed, Veronica casts one last spell to evacuate Serena and the others to safety.

After saving Erik and his sister Mia from another curse in Sniflheim, the party sets off for Arboria. Their route out of the Snærfelt is quickly cut off by the Auroral Serpent, frozen in the fjords until the Fall. Though they are able to weaken the dragon, he attempts to finish the Luminary and friends with the last of his power. As the Serpent readies for a mortal strike, Serena stuns him with her lyre and calls forth a violent wind to banish him. She then offers to accompany the party in search of Veronica.

As they enter the devastated holy city, Serena can sense Veronica’s spirit coming from the north, in the Grove of Repose where the two used to play. They find her, but she is no longer among the living, her body disintegrating on sight and leaving her wand behind. The Luminary touches the wand to witness Veronica‘s final moments. News of her death travels quickly, and a great funeral is held by the high priest and the people. All are deeply saddened. That evening, Serena goes out to an overlook adjacent to the grove and plays a tune on her lyre once more, remembering how her sister cared for her. The Luminary is asked to provide her comfort as she spends the rest of the night in tears. Serena then cuts her hair short, offering the discarded locks in the direction of Veronica‘s wand. Once again, the wand glows, this time releasing Veronica's soul unto Serena; and with it, her skills and powers.

The next morning, the Luminary and Serena head for the summit of a mountain, where the rest of the party is waiting. A flute once carried by Veronica is presented, and Serena plays its tune, but nothing happens. The Luminary tries next. Before their eyes, the flute becomes a fishing rod. As he waits for the catch, there is a sharp pull on the line, and Cetacea, the great white whale that once ferried Erdwin across the skies, appears in all her glory.

At the Fortress of Fear, she shows sad surprise at Veronica's presence. However, "Veronica" tells the Luminary to drop dead for her sake, causing Serena to play her harp's tune, and dispelling the Veronica illusion made by Jasper.

As a Priest, Serena will more than likely serve as her party's de facto healer and buffer in the early going; and for this reason, the player should focus on improving her magical mending as they are able. To that end, one can invest in her Wands and Harpistry trees as much as is possible. With her sister, she gains access to powerful regeneration magic when pepped up.

Although Rab learns some spells earlier (and is quite useful when he does), Serena will far outrank him when the story effectively gives her a class change to Sage. She will have the lowest physical stats of the six characters that join the party, but has a broad range of spells to compensate for it. She also gets nearly double the skill points allocation when she is recruited, potentially giving her access to her most powerful priest abilities. At this point, the player is free to mould Serena as is seen fit.

She returns to being a Priest if the player chooses to proceed with the "In Search of Lost Time" scenario, but gains access to the highest levels of wind and healing magic along with regaining her unique defensive abilities as a result. In particular, the early Snap, Crackle, Poof! skill can help mitigate the effects of enemy debuffs, while the late Grace of the Goddess can save her from insta-death attacks, giving her the potential to rescue a doomed fight. Rab still learns many more spells, but they are nowhere near the strengths of either sister; his also have a more situational usefulness than either Serena’s or Veronica’s at this point. 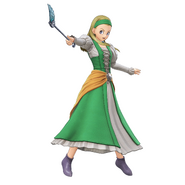 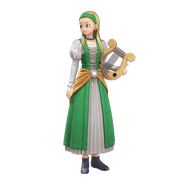 Retrieved from "https://dragonquest.fandom.com/wiki/Serena_(Dragon_Quest_XI)?oldid=167835"
Community content is available under CC-BY-SA unless otherwise noted.