The silver shield is a recurring shield in the Dragon Quest series, typically second in defence only to the legendary shield of each respective title.

Inspired by the Aegis, the mythical shield Perseus used to protect himself from Medusa's stony gaze, the shield is made of mythril silver, freed from trace impurities through countless hours of refinement, and so perfectly crafted, it is able to reflect images like a mirror. Older concept art has Medusa's reflection captured in the center of the shield. In more recent depictions, the shield has become more round and features an intricate filigree design in the center. Due to its light weight and ease of use, many characters are able to equip it, such as spellcasters.

It can only be found by unlocking a door in the east side of Mercado and speaking to one of the merchants. The silver shield is the most expensive item in the game and is also the most protective shield as Erdrick's shield did appear. Due to text restrictions in the Game Boy Color remake of Dragon Quest, the silver shield was renamed silver with a symbol of a shield next to it.

The silver shield has a defence bonus of +30 and unlike other titles in the series, it does not reduce elemental damage. It can be purchased for 8,800 gold at Tantegel and Kol and sold for 6,600 gold. They can be equipped by the Hero, Warriors, Priests, Thieves, and Sages.

The silver shield has a defence bonus of +55, and reduces frizz, sizz, and fire breath by 15. They can be bought for 33,000 gold in Precaria. The Hero, his son, and his daughter can equip it

The silver shield has a defence bonus of +55, a style bonus of +38, and reduces Frizz, Sizz, Bang, and fire breath damage by 25. They can be purchased in Greedmore Valley for 33,000 gold. It can be equipped by the Hero, Carver, Milly, Ashlynn, Terry, and the slime buddies.

The silver shield has a defence bonus of +50, a style bonus of +38, and reduces Frizz, Sizz, Bang, and fire breath damage by 25. It can be purchased on the Sea Dragon for 33,000 gold and sold for 16,500 gold. It can be equipped by all characters. Silver shields can also be won as prizes from the Lucky Panel at the Haven and Buccanham's Casinos.

The silver shield offers a defense bonus of +48, and provides the same elemental resistances as in the previous two games. It can be equipped by the Hero, Yangus, Angelo, and Morrie. One shield can be found at the Black Citadel, but others can only be made using the Alchemy Pot.

A shiny shield that shuns MP absorption, fire and thunder.

The silver shield has a blocking bonus of +25 and can be equipped by Luceus, Aurora, and Terry. It can be purchased after the events at the Pinnacle of Light for 6,200 gold and sold for 3,100 gold.

In the Captain N: The Game Master episode "The Trojan Dragon", both the Silver shield and Flame sword are hidden in a cave, and guarded by an Axe knight until Captain N defeats it. The shield, as shown in the episode, is mainly red with some silver bits on it. 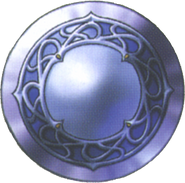 Silver shield's DQVII artwork.
Add a photo to this gallery

Retrieved from "https://dragonquest.fandom.com/wiki/Silver_shield?oldid=179760"
Community content is available under CC-BY-SA unless otherwise noted.