The slime is a recurring monster in the Dragon Quest series. Introduced in the original Dragon Quest, slimes have since become the series' mascot due to their popularity and iconic qualities to the point that they even have their own Monster Family. The basic slime has been in every Dragon Quest game to date.

The slime is known for its onion/rain droplet shape, round eyes, and goofy, toothless smile; the former two traits having become the ones shared amongst nearly all their slippery siblings.

Slimes are typically the weakest enemies in every game, having no special abilities and being easily disposed of, and likely the first monster the player ever encounters in a battle. However, starting with Dragon Quest IV, there will occasionally be stronger slimes that can call on others of their kind; they may form a king slime when eight gather and starting in Dragon Quest IX three slimes may join to form the slime stack.

In some games, slimes have been domesticated into pets and others have gained the ability to speak the human language. In recent translations, all slimes have a certain verbal tic of replacing certain words and syllables with similar, 'slimier' ones, such as saying goo instead of good, gooman instead of human, and slime instead of time, to give just a few (or goo) examples.

While there are male and female slimes, the sex/gender of regular or nameless slimes is ambiguous and something that one cannot tell from their appearance; one cannot discern this information either all of the time or some of the time.

There are three type of slimes, but all share the same bestiary entry and item drops. The ones near Alltrades Abbey will call in reinforcements and attempt to form a Slime stack; likewise those near Bloomingdale will attempt to form a King slime. Occasionally, the slimes that form the slime stack might call on too many slimes, to a maximum of five, and won't be able to form the stack until they are down to three.

Slimes that fuse into Slime stacks

Slimes that fuse into King slimes

A slime is the first monster the player has on their team, that particular slime having once been the pet of the previous king of GreatTree.

The slime reprises its role as the first monster owned by the player, this one being Slash, a slime that traveled with Cobi and Tara's family to GreatLog.

You cannot conventionally breed a Slime, you can only breed two slime together to create a stronger Slime.

In a break from tradition, the slime is not the first monster given to the player, who is instead offered a choice of either a platypunk, mischievous mole, or dracky. The slime does appear on the first island inhabited by wild monsters that the player visits, Infant Isle, along with several uncharted islands, and is likely the first wild monster encountered in the game.

Slimes are the first monsters encountered in the game aside from the ones that the player has to choose from at the start of the game. The slime is a measly Rank F monster. Slimes, when synthesised over level twenty, create a Slime X. Two level fifty Slime X's make a Slime XY.

Can be found at Greena Pastures.

Their main drop when they are defeated in this game is blue goo, while the she-slimes drop orange oil.

Slimes appear in Episode 23 "Trojan Dragon", where they attack Captain N and his friends after they got the Sunstone back from the Dragonlord. The Slimes, along with the Blue dragon and the Knight aberrant, are the only Dragon Quest monsters to appear on the show. 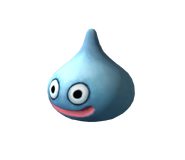