Slon the Rook (formerly Gonz and Gonze) is a monster in Dragon Quest V and member of the Order of Zugzwang.

Slon appears as a large purple warthog/bull dog, with labels of the generic enemies that make up his species varying. He wears heavy armor and always carries around a weapon of some sort and a shield. His weapon varies from a longsword, an axe, to a weapon that's not quite either in the PS2 version. His shield sometimes has spikes on it. He has a giant mouth that he makes heavy use of in his attacks.

Slon is a brutal antagonist who has no problems with murder and loyally serves Ladja. He does not actually recognize the main character after the time jump and only knows who he is because of Ladja.

In the English DS version of V, he speaks with a thick Russian accent, like all other members of the Order of Zugzwang.

Slon is summoned alongside Kon the Knight by Ladja in order to kill Pankraz, the main character's father. While he and Kon cannot defeat him alone, Ladja threatens to kill Pankraz's child and forces the loving father to take a heavy beating from Slon and Kon before Ladja finishes him off.

Slon is fought by the hero many, many years after this. He is encountered within Talon Tower, guarding a treasure chest with one of the Dragon Eyes for Bishop Ladja. He fights the Hero (Dragon Quest V) and his team, only to be defeated.

Slon the Rook's artwork for MBRV. 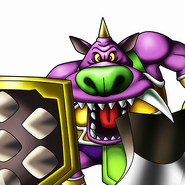 Slon the Rook, as seen in Dragon Quest of the Stars
Add a photo to this gallery

Retrieved from "https://dragonquest.fandom.com/wiki/Slon_the_Rook?oldid=188829"
Community content is available under CC-BY-SA unless otherwise noted.