Squidzilla is a monster who appears in the Dragon Quest series.

The Squidzilla looks similar to the King Squid, but with blue flesh and green tinges on the head, arm suckers and tentacle suckers. It is a more massive and aggressive member of the squid family. In the case of Dragon Quest III, it is generally found in the colder ocean regions of the world. 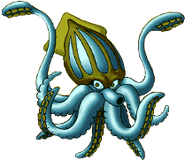 Squidzilla's artwork for SL.
Add a photo to this gallery

Retrieved from "https://dragonquest.fandom.com/wiki/Squidzilla?oldid=190390"
Community content is available under CC-BY-SA unless otherwise noted.