Stella has long, wavy blonde hair with a pink flower, the Stella Starflower, on her head. She has pink glittery wings, an orange and yellow dress, and dark stockings with high heel sandals that each have a red bow on the front strap.

She is full of confidence in herself, making her come across as arrogant at times. Her demeanour is very much that of a stereotypical diva, however it is offset by her use of slang terms such as 'flap' in place of expletives and saying 'gal' instead of 'girl'. After she gets to know the Hero, she starts to relax her brashness and warms up to them.

She is the non-combatant companion character to the Hero, both throughout the story and as part of the Battle Records menu on the pause menu.

In the menus, she approves of titles that the Hero sets for themselves in the menu and gives generous tips for both battle and other gameplay elements. Stella also acts as the Hero's voice, although not on their behalf, by either talking to the Hero, channeling her own thoughts or talking to the subject. When the Hero is always engaging in battles one after the other, she will comment on the excess of battles and alluding to how well the Hero is doing.

A spoiler draws near! Click 'show' to display, otherwise run away!
Before becoming the companion of the Hero and after the earthquake in the Protectorate, Stella sets out to find the Starflight Express which had been torn apart by Corvus. Presumably, she had been onboard at the time as she is the co-pilot along with Captain Sterling, the main pilot.

Upon finding the Starflight Express wedged between trees at the passage to Stornway, she realises that it cannot be operated without a Celestrian onboard. On her journey to search for a Celestrian, she bumps into the Hero at Angel Falls and is curious as to how they can see her. When informed that the Hero is a Celestrian, she is at first in disbelief as they do not have a halo nor have angelic wings that define a Celestrian. It is only until they receive Benevolessence from Erinn's deceased father, Erdwinn, that Stella starts to believe the Hero's story.

After reaching the Observatory, she decides that it is time to part ways with the Hero as she assumes they will resume their duties as a Celestrian and regain their Guardianship. While preparing to take off elsewhere, the Hero comes back onboard, still wingless, and needs Stella's assistance to reclaim the fallen Fyggs to which she agrees. Setting on yet another quest, Stella and the Hero become companions once again. Throughout the quest, Stella is makes witty jokes, involves herself in discourse, conversates with the Hero and helps in retrieving the Fyggs. Her bond with the Hero strengthens throughout this, and it is clear that she is thankful to be by the Hero's side. Once all the Fyggs are collected, she sets out to return to the Observatory with the Hero.

During their ascent onboard the Starflight Express, they are interrupted by Aquila who takes the Fyggs off of the Hero. With Fyggs in-hand, Aquila proceeds to wound the Hero and they fall unconscious. Stella freaks out as a response to this, showing grave concern for the Hero and their mission to return the Fyggs. An attack from Barbarus and Hootingham-Gore destabilizes the carriage, causing the Hero to slide out of the open door that Aquila fled from. Unable to keep the Hero from falling, she falls with them and they are temporarily separated.

Stella finds the Hero laying unconscious and badly wounded in Wormwood Creek, where residents attempt to wake the Hero up. She tries to wake the Hero up by flying into them and yelling at them, to no avail. A resident, Wallace, takes the Hero to his house and Stella follows again until they wake up again.

After the events in Wormwood Creek, Stella accompanies the Hero on their way to find Greygnarl in Upover so they can wage battle against Barbarus and get a lead onto either finding the Fyggs, Aquila or returning to the Observatory. The Hero rides Greygnarl and takes on Barbarus, until Greygnarl is defeated and the Hero falls from the skies again.

Having lost the Hero, she makes her way to the back to the Starflight Express. Sometime later, the Starflight Express is summoned by Captain Sterling and his whistle. She is reunited with both the Hero and Sterling, who she calls 'Fatguts', when they come onboard; now they are all able to journey to the Observatory.

At the Observatory, the Hero needs to go and report the recent events to Apus Major and Stella waits onboard for their return. When they finally return, they bring Apus Major along with them and all of the Fyggs too. She helps Sterling in taking the Starflight Express to the Realm of the Almighty to present the Fyggs to Zenus.

With the Almighty nowhere to be found, she watches the Hero step into a puddle of light and release all of the Fyggs. Celestria appears instead, transporting Stella and the others to Yggdrasil. She does not comment much on Celestria and returns to the Starflight Express after the scenario. She is aware, however, that the Hero had been given a Fygg that would make them become mortal.

Stella feels upset at the thought of never being able to see the Hero again, however hits them if they choose not to eat the Fygg. She once again accompanies the Hero on their journey, this time to put a stop to Corvus.

After the defeat of Corvus, she, along with the Celestrians, begin to disappear from the Hero's perception. She lets her emotions for the Hero spill out, however she returns to her normal self by alluding to wanting to be a nail artist.

It is shown that Stella might not share Celestria's love for mortalkind, at least not as much. This is backed up by the fact that, a little after the beginning of the game, Stella shows little to no interest for the people of Stornway or Coffinwell. Instead, she is more focused on the player obtaining the remaining Benevolessence and returning to the Observatory. This is even further proven after Catarrhina's death; Stella being let down by the fact thet they do not recieve any thanks for defeating the Ragin' Contagion and saving Coffinwell from the disease. However, judging by her relation to Sterling, she is most likely holding duty in a much higher regard, unlike Sterling who has assisted the Hero in saving the prisoners of the Gortress.

King Godwyn who was married to Stellestria, often called his wife "Stella" although there are no direct connections between him and Stella.
Thou hast defeated the spoiler.

These quests are only obtainable via DQVC.

A spoiler draws near! Click 'show' to display, otherwise run away!
The supposed creator of the Gortress, Stellestria, appears to be a portmanteau of the names Stella and Celestria. This is proven in the post-game quest, #149, Intreeguing Mystery, in which Stella was once part of Stellestria.

If correct, due to Stella being merged with Celestria as Stellestria, the daughter of Zenus', it is possible that she is also a goddess as well.

Throughout the game, Stella is reluctant to discuss the events of 300 years ago and her involvements in them, despite listening to the likes of Greygnarl and King Godwyn express their versions of events. She also avoids the topic of discussing exactly what and who she is.
Thou hast defeated the spoiler.

Stella appears in five places in the world after the Illuminated Sea Chart is obtained. She is also the subject of a Photo Quest.

When spoken to, she will say how she has come to the world of Dragon Quest VIII for a trip. Her clothes can be one of four colour variations per encounter: red, green, blue and purple. A fifth variation is unlocked after encountering the other variations, a rainbow variation, that is rare to encounter.

In Act III, the player can obtain gear for Veronica that allows her to appear as Stella, though the former will retain her braided pigtails. Speak to former MMA fighters Sinderella and Whambelina on the first floor of the casino in Octagonia to claim.

Stella is a playable character. 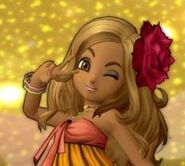 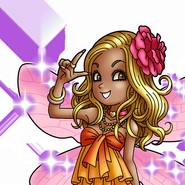 Retrieved from "https://dragonquest.fandom.com/wiki/Stella?oldid=211022"
Community content is available under CC-BY-SA unless otherwise noted.