Stornway is a city in Dragon Quest IX. It is one of the first towns visited by the Hero/Heroine. It is home to the Quester's Rest inn and is generally considered the "central" location in the game, despite only being involved in the early plot. The region surrounding the town shares the name Stornway.

Much of Stornway's importance is related to the Quester's Rest inn, which makes Stornway the hub for recruiting/changing party members, accessing multiplayer, and utilizing the DQVC features of Dragon Quest IX. The town also adds two additional shops after completing the main story of the game, increasing Stornway's usefulness for post-game content.

When the hero arrives in Stornway, they witness Erinn and Patty entering the Inn and, out of curiosity, follow them inside. Patty presents Erinn to Ginny, the Banker, and she questions Patty about how she promised she was going to bring the Inncredible Inntertainer. When Erinn shows them the Inny the hero gave her in Angel Falls, she is ultimately accepted and praised.

After exploring the town, the hero discovers a billboard in the main square that tells of a person called the "Wight Knight" terrorizing the city, and anyone brave enough must report to the castle in the north. When the hero arrives in the castle's throne room, they witness King Schott speaking to his daughter, Princess Simona, but his attention is soon drawn to the hero. After calling them up, he explains that the Wight Knight is after his daughter, Simona, and has promised to appear further north, at a place called Loch Storn.

After the events of Zere and Brigadoom, the hero returns to Stornway and is given their due reward, as well as access to the next town: Coffinwell.

When the hero goes to Erinn, behind the counter in the Quester's Rest, she tells you how other girls her age are off shopping, going on dates, and having fun. She then says that while she was cleaning out the cellar, she found a letter from her mother. It said that her mother left her a gift in a grotto with "Of Dolour" in it's name. She wants the player to lead her to a grotto like this. The hero takes Erinn, and at the bottom floor when the boss is defeated, the red treasure chest appears. Erinn walks over to it and finds a hand-knitted jumper. In the jumper, she finds a letter from her mother which says that since she was ever so sickly, this was all she could manage. And that she hopes Erinn didn't think it would be anything too valuable. But Erinn is very happy. When you go back to the Quester's Rest, she gives you some Yggdrasil Dew and Yggdrasil Leaves. Finally, Patty overhears and says she used to go adventuring, and this comment leads to the next part.

After this incident, if the hero speaks to Erinn again, she says that lately, Patty has been feeling distant. She wants the player to talk to her and see if anythings up. When the hero speaks to Patty, she says she's remembering times she used to spend with a partner of hers named Phoebe. She died in Batsureg, and that's where the hero goes. He/she talks to Batkhaan, and he remembers Phoebe. At night, the hero talks to Phoebe's ghost who tells him/her to talk to her at her grave in Khalaag Coast. The hero must travel by ship. When the hero arrives, she talks to him/her about her adventures with Patty. When you deliver a Friendant and a message from Phoebe to Patty, she decides to get back into adventuring. While also taking care of the Quester's Rest, she will join your team.

The last incedent involving the Quester's Rest is triggered by talking to Sellma, who asks the hero to ask Erinn for the Quester's Rest guestbook. Erinn tells the hero that Ginny has the book. The player takes it and gives it to Sellma. When the hero exits the back of the counter, a couple of men come in and start yelling. Sellma goes out with them, and Erinn asks the player to make sure everything's okay. When the player goes out, Sellma hands the goons the guestbook, and they run off. Sellma sees the hero and tells him/her that she is a spy working for those goons. But she only is because they captured her father. She tells the hero that he/she has to stop them. The hero finds their secret hideout in the Plumbed Depths, where Sellma arrives and the hero sees the boss of the goons, Al Cappaine. Al summons a Drastic Drackal, and when the player defeats it, Sellma finally arrests the goons who call themselves the "Inntouchables" and tells the player what is really going on. She says that she is spy, but only for the Sinndicate of Pubs, Inns, and Taverns. She thanks the hero and he/she goes back to the Quester's Rest, where she tells the hero the Sinndicate has allowed her to join the player's team.

Quester's Request is the Inn in Stornway. This Inn will constantly be a place that is revisited by the player throughout the game, because of its many uses:

As with all towns in Dragon Quest IX, items can be randomly found in cupboards, cabinets, pots, etc.

This location includes a bank or vault.

Note: Quest #039 must be completed to access this island. 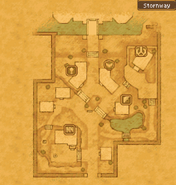 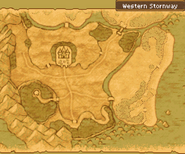 The western region of Stornway.

The eastern region of Stornway.
Add a photo to this gallery

Retrieved from "https://dragonquest.fandom.com/wiki/Stornway?oldid=135852"
Community content is available under CC-BY-SA unless otherwise noted.