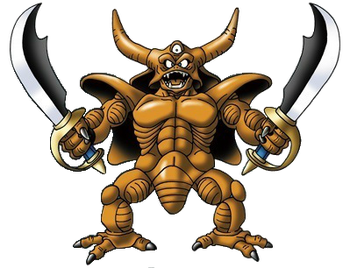 A Superboss is an optional boss far stronger than the final boss, and can often be found in their own Bonus Dungeons. Some of them tie into character stories and add more depth to the world while simply exist for additional challenge or as tribute to previous games in the series; the former happens with superbosses such as Nokturnus, Lord of the Dragovians or the Grotto bosses, the latter often happens with superbosses that are added in remakes such as GranDragn, the Memories Lane bosses or Timewyrm. Final bosses from previous games may sometimes appear as optional bosses as themselves or as monsters referencing them which happened in Dragon Quest IX and Dragon Quest XI.

Defeating them isn't just for bragging rights, because they often drop rewards or allow the player to have a wish granted upon their defeat. In some cases (e.g Nokturnus, Chow Mein and Foo Yung, the Trial of Isles bosses) the player will be rewarded if they can defeat them in a limited amount of turns. Nokturnus is one of the most memorable superbosses because beating him in 20 turns or under would give you an alternate ending where the player would watch him wipe the floor with Mortamor.

A recurring superboss in the series is none other than Estark, who originated in Dragon Quest IV as a regular boss and then became a powerful post-game boss in Dragon Quest V. Each time, his story involves him being asleep for aeons, unable to remember if he was good or evil.

The NES version had no superbosses though the SNES remake added in Xenlon as a post-game boss. Another boss, GranDragn was added in the GBC version of the game.

The original NES game have any optional content, though the DS version did add in 2 superbosses who could be found in the Fungeon: Chow Mein and Foo Yung, who bizarrely had the Casino theme as their battle theme. If you could defeat them, you'd be able to revive Psaro (which allowed you to fight the game's true final boss) and also obtain the Pandemonic Equipment.

Introducing in this game was the series's first superboss: Estark. Found in Estark's Labyrinth, he was far tougher than Grandmaster Nimzo and much stronger than his debut in Dragon Quest IV. This is true in both the original SNES game and it's DS remake. Estark is one of the few superbosses in the series to appear in multiple games, and can be considered Dragon Quest's equivalent of Omega (Final Fantasy). He's also well known for his weakness to Kasnooze, which can often making fighting him far more bearable. Despite his reputation, it's possible to cheese this fight by giving everyone Blizzard Blades and wailing on his while he's asleep. 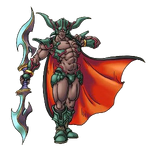 Nokturnus (originally Dark Dream) appeared late in the main story, though he couldn't be fought until you beat the game. Located deep in the Fungeon, the player could choose to summon him, allowing them to fight him. If one defeated him in under 20 turns, he would take you to Mortamor and fight him in your place. Despite Mortamor's strength, Nokturnus destroys him easily, which grants an alternate ending.

These characters served an important role in the story, being in opposition to Orgodemir. However upon beating the game, they could access the Cave to Another World, when they could fight The Almighty in a friendly bout. Defeating him in 20 turns or under would grant you an award. The player could also fight the Fire Spirit, the Earth Spirit, the Wind Spirit and the Water Spirit in Cave to Yet Another World, after defeating The Almighty.

Once the player beats the game and accesses the Heavenly Dais, they'll have to defeat the Dragovian Lord. Once they unlock the Dragovian Trials which allow them to fight the Lord of the Dragovians and then one of his dragon forms (Vermillion Dragon, Emerald Dragon, Silver Dragon, Golden Dragon Darksteel Dragon, Divine Dragon)After defeating Divine Dragon, you'll have to fight a gauntlet of all his Dragon forms, concluding with Ultimate Dragon.

The 3DS version of the game added in Memories Lane, a training ground that adds in stronger versions of various main game bosses that require specialized strategies to overcome. After overcoming them, you'll be fighting Estark who puts Rhapthorne and even Ultimate Dragon to shame; however even at his strongest, Estark still keeps his weakness to Kasnooze.

Dragon Quest IX has many post-game bosses, some of which are DLC exclusive: If the player is willing to venture into the Grottoes, they can take on a boss:Equinox, Nemean, Shogum, Trauminator, Elusid, Sir Sanguinus, Atlas, Hammibal, Fowleye, Excalipurr, Tyrannosaurus Wrecks or Greygnarl. However, they're stronger than the storyline bosses, with Tyrannosaurus Wrecks and Greygnarl in particular among the strongest bosses aside from the Legacy bosses.

The Legacy Bosses in question are important villians or final bosses from previous games: Dragonlord, Malroth, Baramos, Zoma, Psaro, Estark, Nimzo, Murdaw, Mortamor, Nokturnus, Orgodemir, Dhoulmagus and Rhapthorne. For the most part, their maps can be obtained from the game's sidequests, though some bosses have their maps by getting a legacy boss (i.e Dragonlord/Psaro/Nimzo and Baramos/Murdaw/Dhoulmagus) up to Lv:16 in order for them to drop the map. Dragonlord's map in particular is dropped by Greygnarl, though the player only has a 10% chance to obtain it.

The last of this game's superbosses only appear in DLC sidequests: Yore, Rover, King Godfrey, Nodoph and Tyrannosaura Wrecks.

The Trial of Isles has several superbosses, all of whom are dark versions of the Spectral Sentinels (Unfathomable Anger, Sheer Decadence and All-Consuming Greed, Abject Terror and Darkest Despair, and Overweening Pride)

The 3DS version of the game added in several superbosses of it's own, who then were added into the Switch version: (Erdrick's Restless Armour, Lord Dragon, Wyrmalroth, Zomaiden, Psaroid, Nimclops, Mortamammoth, Orgodelotl, Hoopthorne, Hunkorvus, Nelgelas. Defeating these ersatz final bosses will allow you to fight a stronger boss. End of Time is fought at the Alter of an Elusive Age, which is located in Tickington. It's the hardest boss in the 3DS version of the game, practically requiring a Lv: 99 party to defeat it. The Switch version then added in a superboss that surpasses End of Time in terms of difficulty: Timewyrm

The player can actually fight Solitaire in the post-game after the player completes Rank X of the Xeroph Isle Monster Arena and completes both levels of the Monster Scout Proficiency Test. Her monster team consists of a Mumboe Jumboe, an Atlas and a Metal kaiser slime and can be refought as many times as the player wishes. After defeating her for the first time, she'll give the player a Brass Key which can used to unlock a door in the sewers which contains Estark. Defeating Estark will be no easy task because he is the strongest boss in the game; unlike Solitare though, he can only be fought once. After that, the only way to obtain an Estark is to fuse Psaro and a Beetlebully.

Solitaire returns as a post-game boss who can be fought after defeating Malevonyx. Her monster team consists of Atlas and Mumboh-jumboe, though Mumboe Jumboe now takes up 2 monster slots, hence the absence of her Metal Kaiser Slime. She can also be fought as the final opponent in the new Monster Scout Challenge, whose monster team consists of Dr Snapped and Ace of Spades (a callback to the previous game). Estark can be fought in Cragnation during the post-game, though unlike the previous game he won't automatically join you. If you defeat him in 10 turns or under, he'll join you, which grants you one of the strongest 3 slot monsters in the game. Alternately, you can fuse Psaro with a Marquis de Léon to obtain Estark instead.

The player can fight Leonyx, who is the purified form of Malevonyx and is one of the strongest bosses in the entire game. As a giant boss, he can deal far more damage than 1-slot or 2-slot monsters though the Giant Killer skill is effective against him. He's also one of the most difficult monsters to synthesise rivalled by Zenith Dragon and Rigor Mortex. To fuse him, the player needs Don Mole + Orochi + Marquis de Leon + Wildcard.

Dr Snapped appears in the game as an optional boss.

Estark reprises his role as a superboss in this game.

Dragon Quest Swords: The Masked Queen and the Tower of Mirrors

After the player completes Chapter 8 and beats the game, they can access the Olde Reflectory, which is a small room containing several grey mirrors containing Clank 'n' Knalc, Nomeg, Salta, King Latem, 3 of whom stronger versions of bosses (minus King Latem) the player fought in the main story, with King Latem serving as an easy way to gain EXP. Once those 4 were defeated, the player could fight Valgirt.

After defeating it, the player unlocks 3 purple mirrors containing Der Gib, Nomegoen and Valgirt Nedlog, all of whom are much stronger. Defeating them would unlock Edahs 'Sohpix, who was much stronger than Xiphos and all of the other mirror bosses. However, defeating Edahs 'Sohpix was worth it because it allowed you to unlock Payback Mode, which gave you the Deathbringer (Xiphos's sword), a powerful sword which could destroy most enemies. It could also be upgraded into the Deathbringer's Shade, the strongest sword in the game, bar none.

Retrieved from "https://dragonquest.fandom.com/wiki/Superboss?oldid=181377"
Community content is available under CC-BY-SA unless otherwise noted.