Dragon Quest XI
Sylvando (born Norberto, shortened to Sylv) is a character from Dragon Quest XI. A flamboyant travelling performer, he puts his talents to use in combat with a variety of different techniques and is capable of equipping whips, knives, and one-handed swords.

Sylvando is physically fit with slender yet muscular tones. He has black, shoulder length hair which is slicked back, thin eyebrows, grey eyes, and small silver studs on both ears. Sylvando wears a black and white striped jester's tunic over a red, long-sleeved shirt along with tan tights, purple shoes, and a leather belt worn around the waist. Sylvando also carries a long flute.

Flashy, flamboyant, and at times condescending, Sylvando's dream is to build a theatre of his own and make people all around the world smile. He is described as the mood maker of the party and refers to the Luminary and others as "darlings". Despite his outward appearance as a performer, Sylvando appears to know quite a bit about knighthood and chivalry. His past is shrouded in mystery and when asked, Sylvando tends to avoid the subject. Despite his humorous nonchalance, he is a man of word and is committed to helping his friends.

As he is from Puerto Valor, Sylvando speaks with a Spanish accent; but unlike other Valorians, his speech is generously seasoned with California tropes.

At some point prior to the fall of Dundrasil, Norberto was born to Don Rodrigo, a master swordsman from Puerto Valor. Not long after his birth, his mother, a noblewoman from Zwaardsrust, died, leaving his father to raise him alone.

Norberto spent his formative years under the tutelage of his father, being educated in the ways of the knight. He soon found discomfort with the rigours of training in that it lacked meaning and purpose. He had a fallout with the Don before a circus came to town. Norberto loved what he saw; and from there, he found his calling and set out on a mission to make the world smile.

Now a roving circus showman, the man known as Sylvando has earned his living entertaining countless spectators. He is first seen under the bigtop performing the lead act in Gallopolis's circus, just before the annual Sand National horse race.

Crown Prince Faris, the Sultan's sole son and heir, is slated to compete in the race. He meets with the Luminary's party, hatching a plot to replace himself with a doppelgänger who can ride a horse; Faris is extremely cowardly and hippophobic. Members of the party have their suspicions, but the Luminary gives in to Faris's request.

The next day, the Luminary meets with Faris once more, and performs the switch. Donning the Prince's equestrian garb, the Luminary takes his place in the race and competes. When he finishes, Faris switches places again. This time, he goes out on his horse, much to his fear and loathing, and basks in the celebration from the crowd. Soon after, Faris agrees to meet with the Sultan for the Rainbough, as was promised the day before.

Before the prince can make his request, the kingdom is suddenly attacked by a beast known as the Slayer of the Sands. Thus does the Sultan send his son on an expedition to slay it.

Having watched the saga from afar, Sylvando has observed Faris's cowardice. As the prince sends our heroes on his mission, Sylvando offers to tag along. The party, now five strong, passes two checkpoints on the way to the beast‘s haunt on the north side of the desert. Faris is already there, but once again, his nerves get the better of him. Camping the night, they begin their search.

The Slayer of the Sands catches everyone by surprise. The Luminary’s party must confront the crustacean to subdue it and save Faris. They succeed, and Sylvando binds it with a chain. Faris carts the beast back to Gallopolis, believing it dead.

As the prince celebrates his apparent victory, the sand crab suddenly awakens from its slumber. Faris, scared out of his mind, tries to fight it, and fails miserably. Just then, Sylvando returns and finishes it off. Faris is left to confront the ignoble truth of his failure. The Sultan, meanwhile, has already sold the branch kept in his possession to a traveling merchant.

As the Luminary and friends attempt to leave the city, Sylvando surprises them, drawing mixed emotions from them. He does not understand their full purpose, but wishes to join the quest anyway so that he can make people happy. With a flip and a flourish, he joins.

Sylvando takes the party to Gondolia to pick up his ship, the Salty Stallion, managed by an old friend of his. After the Luminary and his allies pick up some birdsong nectar for the Doge's son, Jasper and the Knights of Heliodor attempt to capture the Luminary, but they nearly escape, however Erik is hit by a dark blast. After freeing Erik and defeating Jasper, Sylvando flees and comes back with his ship getting the Luminary and his allies to safety. Sylvando thanks his friend Dave for coming to the rescue, but a Tentacular is sent by Jasper to stop the ship, but the Doge orders merchant ships to provide cover for the party's escape, a gift in thanks for restoring his son to full health.

Always a fan of grand stages, Sylvando participates in the Octagonia Masked Martial Arts Tournament for the Rainbough that the merchant bought from the Sultan, where he squares off with the Luminary and his partner Vince Vanquish in a quarterfinal bout. Sterling Sylva and Golden Boy are no match, and the Bullion Boys are eliminated. The In-Vince-ibles survive two more rounds to win the grand prize, but the second-place finishers, old man Rab and his companion Jade, take off with it.

Sylvando later takes it upon himself to investigate the events at Phnom Nonh when led by a girl into the Ruins of Nhou Wat, as he cannot bear her in tears. This leads the party to the great mural, which seems to fill with life by the day. Sylvando and the others soon discover themselves pulled into the mural, where Dora-in-Grey has laid a trap to steal souls. She is quickly dispatched, though not before she tells them an ominous warning.

After their defeat at Yggdrasil and the fall of the great World Tree at the hands of Jasper and Mordegon, Sylvando resumes touring the devastated Erdrea in hopes of bringing merriment, picking up a sizable following. When the Luminary, Hendrik, and Rab make their way to the Champs Sauvage, they spot a civilian being assailed by a cheater cheetah. Sylv's parade is also marching through; and when they join in, Sylv defeats the monster. The man they assisted, Da, was heading home to Phnom Nonh when he was waylaid. Sylv and the others agree to take him there.

Back in Phnom Nonh, the mood is anything but merry, and the city has been stripped of much. Sylv again jumps to action and scours for information with his crew fanning out. A beast named Avarith appeared some time after the Fall and has demanded tribute of things most valuable; and Da’s boy, Son, has gone missing. Da, however, does not want to see Son, as he is upset. Nevertheless, other townsfolk have placed Avarith in a grotto to the south, so the party goes there. They meet Son on the way there, searching for a way to retrieve his father's necklace, an object of great worth.

Inside the grotto, the party finds piles of treasure amassed, as well as several cells with human prisoners, payment for the greedy lizard. As the party readies itself to confront the beast, Sylv enters negotiations with her for the captives' release. The dragon is then made to believe she will be receiving something of value. When instead she finds a pile of dung in her claws, Avarith is enraged, and attacks the rest of the party. With her defeat, everyone can safely return to Phnom Nonh.

Son then reveals his purpose: to retrieve the prized necklace. He had hoped to win back his father's affection, but finds the necklace broken. Ashamed of the loss, Son is comforted by Sylv, and they return him home, Da is overcome with joy, for he lied in order to draw Avarith away from Son. Mony, the innkeeper, arrives and thanks the party for once again freeing Phnom Nonh from darkness. Sylvando soon realises that he must make amends with his father before he joins the Luminary's new battle—but first, he has to find a home for his "Soldiers of Smile".

The Luminary and his party head back through the Costa Valor and to Puerto Valor to meet with Don Rodrigo to discuss their journey. While the Don meets with Hendrik to reflect on what has transpired, our hero picks up the nervous Sylvando and brings him to the Don. Father and son enter into a spat, but the Don reminds Sylv he still has an oath to fulfil. Having made peace with his father somewhat, Sylv asks one last favour: take care of his boys. The Don is forced into party attire by the troupe, but allows his son to go after Mordegon that he may keep his word, as is the duty of a knight.

With the Luminary able to bend time and avoid the Fall completely, Sylv's own timeline changes drastically at some points, and very little in others. For instance, Hendrik already knew of Sylv's falling out with the Don upon travelling to Puerto Valor to consult with his former mentor about the dark star in residence above Erdrea; it is Hendrik who persuades Sylvando to come along and return to meet the Don, unfazed by any of Sylvando's excuses not to.

Though the spat plays out in much the same fashion as before, Sylvando and Hendrik remain at odds with one another over what it means to be a knight. Thus does the Don propose a test of a knight's most important asset. If the pair can demonstrate camaraderie, they will be given a potent weapon with which to battle their new foe. The Don tells the party of a longstanding trial in the Kingsbarrow; to overcome it, the two swordsmen must work in tandem to defeat a pair of golden guards with the same finishing move. They are successful; and while the Don has only recently recovered from a host of injuries and cannot fight alongside his two students, he gives them the ability to call him with a new pep power.

In the expansion, Sylv’s side story starts off sad because of Jasper and Mordegon's victory at the World Tree. Dave snaps him out of his funk and tells him to bring happiness and sunshine back to the people of Erdrea, to which Sylv agrees.

Being a traditional Luminary first and foremost, Sylvando gets many boosts to his agility and charm throughout his skill tree. Though proficient in three weapon classes, it is advisable to start with either Swords or Knives. From there, the player should invest in his Showmanship, as the Hustle Dance ability can be a lifesaver against group-targeting foes, many of which appear late.

As for innate skills, Sylv has exclusivity with a range of buffs and debuffs, and has the potential to counter some of the most annoying ailments with a Sobering Slap. Despite his initial weaknesses in other areas, he can be quite useful for a good portion of the game. 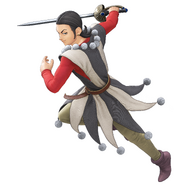 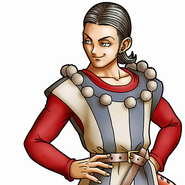 Sylvando, as seen in Dragon Quest of the Stars

Sylvando's chibi appearance in Dragon Quest of the Stars