Terry (テリー Terii) the blue swordsman is a brash, arrogant character in Dragon Quest VI who joins the hero's party later in the game. Prior to joining he is encountered several times throughout the story, beating the party to the in various goals and reaping the rewards for himself. As a child, Terry was the main character of Dragon Quest Monsters.

Terry wears a blue cap to cover his white hair, a blue tunic with matching gloves over a black undershirt, and white pants capped with black boots. The tunic is partially covered with a section of Leather armour, and he carries a satchel at his side.

Terry is the archetypal "lone wolf" in that he prefers to work alone and hates to depend on others. While he is not strictly anti-social, Terry is very condescending towards others and speaks in a terse manner. This bellicose attitude stems from his profound (and well hidden) loneliness, as shown in his Lucky Dip antics. That being said, he is still a good person at heart and is strongly implied to have saved several people from the jaws of monsters during his travels, most notably Donna the bar maid from Port Prospect.

Terry is a talented swordsman, traveling the world to find more powerful weapons and to prove his strength. He is first met by the hero in the kingdom of Arkbolt setting out to defeat the hacksaurus terrorizing the cave to the north. Terry is able to reach the monster first and defeat it in battle. Next he is met in the Everfrost Grotto, where the Sword of Ramias is found. Terry decides to leave the sword for the hero though, since it is all rusty. Finally Terry must be defeated in battle before the Cloudsgate Citadel can reappear in the Dream World. Once Dhuran, the boss imprisoning Cloudsgate Citadel is defeated, Terry will join the hero's party.

Terry initially goes on his quest to become more powerful, because he was unable to protect his older sister, Milly, while growing up in Felonia. She was taken away when they were younger, which prompted Terry to pursue his quest. Somewhere along the way, he lost sight of his true goal, and doesn't even recognize Milly as a member of the hero's party. Once Terry is defeated, he and Milly are reunited and reconcile.

As a young child, Milly was taken by Warubou to the Kingdom of GreatLog. A few moments later, Watabou appeared and invited Terry to the Kingdom of GreatTree. Terry's sole goal was to find his sister, but after visiting the King of GreatTree, he was told that in order to save Milly, and keep with the King's task, he was to win the Starry Night Tournament, which is said to grant the wish of the champion. Terry set off to recruit monsters in order to win.

Upon clearing the many gates, and solving the Kingdom's problems, he enters the tournament and wins his way to the battle against the champion of GreatLog. Unbeknownst to him, and perhaps the entirety of GreatTree, the Champion is revealed to be his sister Milly. After winning the tournament, the two siblings are reunited.

The World Tree's Woe and the Blight Below

In the Mobile Device port, Terry joins at level 33, having mastered the Priest and Mage vocation in addition to those listed above. His Strength at level 33 has been increased by 5 points, giving him a new cap of 335. 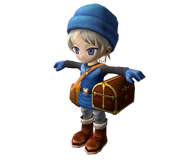 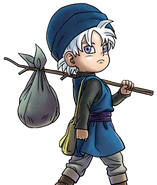 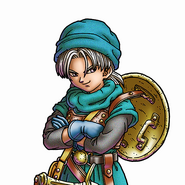 Terry, as seen in Dragon Quest of the Stars