The Time Being is a large, imposing humanoid dressed in elaborate green and grey robes carrying a silver glaive-like staff. It wears golden shoes, a small grey bolero jacket on its upper body with a grey and gold cape attached, and a large grey and gold belt around its waist. Its "face" appears to be a singular eye which is mostly covered by its robes and a golden headpiece with two spikes.

This battle is quite rough, even at level 22 and above, since the Time Being knows Frizzle and Boom and uses them frequently. A Priest should be on standby at all times.

The bigger threats are his side winder sidekicks because they can throw the sands of time and replay the battle from the top, so take them out first. Once they are down, attackers will be free to hack away at him. Maribel should also Sap twice to soften him up.

While keeping everyone's HP above 70-80 will be challenging because his attacks hit hard, the devil will fall, dropping a Yellow Fragment.

After the battle, smash the giant sandglass to get the Sands of Time and end Groundhog Day for good.

The Time Being's name is a pun based on the English phrase, "for the time being," a phrase of time which means for the present, or until some other arrangement has been made. 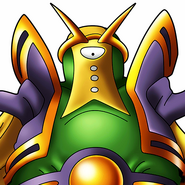 The Time Being, as seen in Dragon Quest of the Stars