The thief's key is a recurring item that is needed to unlock certain doors and/or chests. It is usually the first key in the game to be found.

Held by an old man at the top of the Dreamer's Tower. It can open yellow (NES) or red (remakes) barred doors.

The Thief's Key is given to Alena in Chapter 2 after she saves Anya from the kidnappers, and is needed to get through Birdsong Tower. In Chapter 5, she still has the key upon joining up with the hero. The Thief's Key unlocks blue doors.

The Thief's Key can first be purchased at the The Bazaar in Haggleton. The price for it starts at 2,000 Gold Coins, but it can be bartered down to 200. The shop selling it closes after the Ra's Mirror is obtained.

It is also available for 200 Gold Coins at the item shop in the inn at Somnia in the Lower World. The shop closes after Murdaw is defeated.

The Thief's Key can first be purchased at the Pilgrim's Perdition for 470 Gold Coins.

The thief's key can be created through alchemy by combining a bronze knife (available at the Peregrin Quay weapon shop) and an Iron nail. It is also used as an ingredient for making a Bandit axe when mixed with a battle axe.

The Thief's key is an important item in Dragon Quest IX.

The various locked doors require either the Magic key or the Ultimate key.

The Thief's key is provided by Cap'n Max Meddlin' when the hero's tally of handed-in mini medals reaches four.

The following locations contain chests that can be unlocked by the Thief's Key: 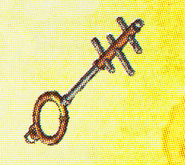 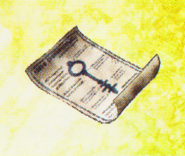 Retrieved from "https://dragonquest.fandom.com/wiki/Thief%27s_key?oldid=170992"
Community content is available under CC-BY-SA unless otherwise noted.