Male or Female
The Tockles are a diminutive race of ethereal beings in Dragon Quest XI. Most commonly seen as transient bystanders that fade away when approached, Tockles live in Tickington, a community of their own outside of the regular flow of time.

Tockles are small, rounded beings of a simplified human shape. They have short legs and long arms that trails behind them when they walk, and their faces consist of very simple markings that resemble wide eyes and a nose. Though the common Tockle is white, they appear in a variety of colors. Despite their ghostly appearances, Tockles are very much a physical race, with Tickington having a farm, bar, and several Tockles speaking of having children or grandchildren of their own.

Humans (and presumably the other races) cannot see Tockles. Only the Luminary is able to see them initially, with his companions assuming he is talking to himself until they are transported to Tickington. The Tockles themselves enjoy this fact, as it allows them to play pranks with impunity.

Tockles appear in all versions of XI, but play a larger role in the 3DS and Switch versions.

Tockles are tasked with watching over the passage of time and to correct any errors that may disrupt the past. They perform these tasks by keeping watch over the events of previous games in the Echo Chamber, the holy ground where records of past heroes and villains are kept. During the events of XI, a dangerous monster has rewritten several of these passages for the worse, forcing the Tockles to seek the Luminary's aid. The hero must find the Tockles dispatched to Erdrea to recover passwords that will allow him access to the worlds kept within the tomes.

Tockles appear as a collectable spirit the player may equip to any of their fighters, and they will grant immunity to fog conditions when equipped. The spirit is unlocked automatically when save date of Dragon Quest XI or the demo is detected, as of SSBU's version 5.0 update. Additionally, since SSBU's version 6.0 update, Tockles now have an official spirit battle in the Dragon Quest DLC Spirits selection. 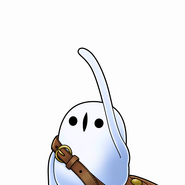 A Tockle as they appears in Dragon Quest of the Stars