Torneko no Daiboken: Fushigi no Dungeon

Developed by Chunsoft, this was the first entry in the long-running Mysterious Dungeon series, a series of games that are based around the roguelike genre. The game was released in Japan on 19 September 1993 for Super Famicom and published by Chunsoft itself.

The game takes places after the events in Dragon Quest IV. With Psaro defeated, peace returns to the land. Torneko goes back to his recently opened shop at Endor. One day, he hears rumor of a mysterious dungeon full of riches. Since his dream is to open the best shop in the World, he gets intrigued by the rumor and makes plans to explore it in order to obtain merchandise so that he can archive his dream. After talking with his family, who support him, they move to the far-off land where the mystery dungeon is.

Contrary to a regular Dragon Quest game, the floors in the dungeon of this title are randomly generated. The basis of the mechanics are taken from the 1980 dungeon crawling video game Rogue. There are a total of 32 different types of monsters to fight, all of which come from the Dragon Quest series, ranging from the weak slime to the powerful dragon. As Torneko explores each floor of the dungeon, he can come across one of 79 possible items, which, like the monsters and layout, are randomized. Certain squares on the floor can have a trap. Tornkeo has to explore and get as much treasures as he can and then find the stairs to proceed further or exit the dungeon. Failing to return before being defeated causes Torneko to lose all items and gold accumulated, while exiting the dungeon resets his level to one. The purpose of the gameplay if for players to get items to equip them to Torneko to allow him to explore further and further into the dungeon, managing the pros and cons of risking facing unbeatable enemies and losing gold and items, or returning to base, resetting Torneko's level and having to start from the beginning in a new random dungeon layout, but allowing the Torneko to equip better equipment and save gold to improve his store.

The game was produced by Dragon Quest co-creator Koichi Nakamura. It was his company, Chunsoft, who developed and published the game instead of Enix. As part of the promotional push for the game, a claymation TV commercial was produced as well as an album with the arranged music of Koichi Sugiyama, titled Suite Torneko's Great Adventure: Musical Chemistry.

Album promo page in the manual 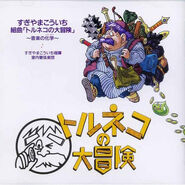 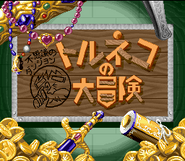 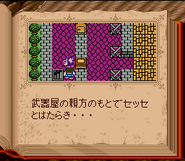 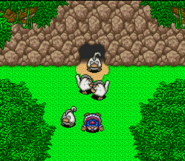 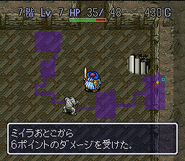