Torneko wears a loose muumuu, chosen for comfort and practicality over fashionability. He hefts a giant backpack of sorts at all times, which he uses to hold his wares, personal belongings and, presumably, some of the party's items. He has a moustache and huge belly, both of which help to bring out his general jolliness. He has blue hair and a blue mustache.

Torneko is a family man, happily married to Tessie and raising his son Tipper while he works as an employee to another merchant. Torneko wants better things for his family, and his desire to be an excellent provider is one of the main reasons he enters into venture capitalism to open his own shop. Wanderlust runs strong in Torneko's veins, and even far-fetched rumours of treasure will light a fire in his heart. He is very grateful to his wife for being understanding and keeping an eye on their son as he sets off on an adventure.

Even though much of his time and effort goes toward accruing gold coins, he doesn't do this out of greed, but to make his wife happy and for altruistic endeavors. Overall, he is a very kind person. On multiple occasions, Torneko goes out of his way to help others in need, regardless of whether it will benefit him for doing so or not (examples including delivering Prince Regan's love letter to Veronica, and smuggling a Chimera wing to Finn so he can escape jail).

While not necessarily greedy, Torneko has the typical mindset of a merchant, always looking for opportunities to set up shop and make a profit, even at rather inopportune times and locations. While Torneko appears to be loyal to the hero to the end, he jokes about leaving the party after having collected the Zenithian Equipment since that was his original goal to begin with. He does seem to have a rather cowardly side. As seen in the party chat, Torneko would sometimes volunteer to remain behind in the wagon right before facing a formidable adversary, only to claim he was kidding right afterwards. Torneko is often noted by his boss to be lazy. This is further seen when he meets the Hero, Meena, and Maya at Pharos Beacon. Since he considered the monsters too tough for him to handle himself, he sticks the task of restoring light to the flames to the others before heading back to Porthtrunnel (although this action could be somewhat justified by the fact that Torneko had a bounty on his head for rebuilding the Trans-Montane Tunnel).

Torneko wakes up in Chapter 3 in his house in Lakanaba to work his job at the local weapons shop while supporting his wife Tessie and his son Tipper. However, he feels that this life is not good enough for him, so he sets on a journey to fulfill his dream, which is to own a shop. He then hears about the Steel Strongbox that allows him to travel anywhere without worrying about dying, because it keeps all of the Gold when he dies, instead of taking half of it.

Torneko ends up getting the strongbox in a cave up north and heads south to Ballymoral, where he comes across Old Man Finnegan's son, Finn, who is in prison and asks him for a chimaera wing to return home to Lakanaba, which Torneko does. While at the castle, he learns of Archie O'Tect, who was supposed to repair the bridge between Ballymoral and Endor, and that he hasn't arrived. He manages to find the architect in the north in what appeared to be a town called Shinnock.

Hearing of some foxes in the area, however, Torneko returns to Lakanaba to request the use of Finn's dog, Fido, to seek out a fox, which proves to be successful. As a result, Archie resumes his duty to repair the bridge. Thus, Torneko heads to Endor, but not before receiving a letter from Prince Regan to give to Princess Veronica of Endor.

Torneko makes it to the castle and meets an old man who wants to sell his shop to someone with permission from King Norman. The King states that he will consider the merchant's request. While in the throne room, he reads the letter to the Princess detailing that King Shamus of Ballymoral is seeking to conquer Endor, prompting Endor's King to give him the Royal Scroll (which is a request for the children of both castles to marry, and thus avoiding the need to go to war).

Torneko delivers the Scroll to King Shamus, who agrees to dismiss his plans. Soon after, King Norman allows the merchant to open a shop, which he does and calls his family over to their new home.

Afterwards, Torneko's attention is turned toward an old man who wanted to continue developing the Trans-Montane Tunnel, which will lead from Endor to the country of Casabranca. He needed 60,000 gold coins to achieve this, which Torneko helped out with (through making money at his shop, as well as providing a set of Steel broadswords and Iron armours to Endor's warriors).

Once the tunnel is completed, Torneko traveled through on behalf of the old man and accepts the task of carrying on his dream by traveling the world by ship and gathering many legendary treasures.

He managed to cross the desert at Last Chance Saloon through the aid of a caravan, and passed through Bath.

Torneko made it to Porthtrunnel and paid to have a ship made, while hearing of an old man in Mintos who has a treasure map. He left upon hearing of monsters who corrupted the lighthouse fire at Pharos Beacon to restore peace to the oceans. Upon finding the monsters to be too strong, he made a plea to the Hero and company to find the Holy Embers and to defeat the ones causing the problems at the lighthouse. They agree to do so, and are joined by Torneko shortly after, who provides use of his ship for travels.

Upon defeating Psaro the Manslayer (Aamon in the remakes), the party returns to their lives with Torneko, returning to his family in Endor, and later showing up with the group in the Hero's Hometown to see the Hero.

Torneko appears at the inn of Reaper's Peak in the near-future version of the town and is surprised by there being a town within the Fungeon. He is impressed by the fact that the Hero explored it, and gives a hint to the location of the hidden treasure in Aridea.

In Dragon Quest VIII, in the Monster Arena Rank S series of fights, the first fight is fought against a character that is named Torneko Taloon and bares a striking resemblance to him. The announcer reinforces this by saying the character is from Lakanaba. He uses treasure based monsters; two Goodybag monsters and a Mimic king. His team is called "Taloon's Treasures".

On December 10, 2010, Torneko began appearing as a special guest at the Quester's Rest in Stornway.

Along with Ryan, Cristo, and Alena, Torneko appears as a playable characters in Itadaki Street Special.

In the Dragon Quest III class system, Taloon has elements of both a merchant and a gadabout. As a merchant, he can protect the party's gold when they go down, and use his appraise ability to give basic information and loss/return estimates on items in the party's possession. However, he also has the goof-off's tendency to not follow orders in battle, bellowing loudly, staring blankly into space, or telling naff gags when ordered to attack. He can equip most weapons and armour, and has respectable HP and level growth, and is otherwise a decent fighter; however, his Defence leaves something to be desired.

In the DS remake of Dragon Quest IV, Taloon's given name is Torneko, his Japanese name. In fact, his last name is Taloon, similar to how Ryan became "Ragnar McRyan." 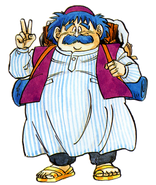 Torneko's artwork for the original IV. 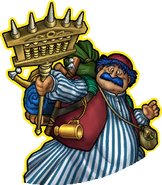 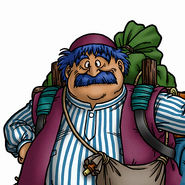 Torneko, as seen in Dragon Quest of the Stars
Add a photo to this gallery
Retrieved from "https://dragonquest.fandom.com/wiki/Torneko_Taloon?oldid=189640"
Community content is available under CC-BY-SA unless otherwise noted.