Human (but turned into a monster)

Trode is a good monarch, consumed with the well-being of his kingdom and especially of his daughter, but shows little concern for anything else. After being cursed with a hideous, toad-like form, Trode travels via a wagon hitched to his now turned horse daugther (a fact that he often is upset by). Throughout the story, Trode offers wisdom and insight for the party as they travel the world in search of Dhoulmagus, and later the demon Rhapthorne. He is responsible for crafting the Alchemy Pot, an important item for crafting new items and weapons. After the defeat of Dhoulmagus, Trode is almost heartbroken by the fact that his and Medea's curse still lingers. However, once Rhapthorne is finally defeated, the two are finally restored to normal.

In the epilogue, King Trode decides to disrupt the arranged marriage of his daugther to Prince Charmles of Argonia, and is hinted to be quite pleased with the romantic nature between Medea and the hero. In the special ending, he becomes the Hero's father-in-law after the revelation of the hero being revealed to be of noble birth.

He and Yangus have a recurring routine in which Trode will often appear out of nowhere during a scene, causing the surprised ex-thief to strike an unusual pose and say "Cor Blimey!!!".

King Trode can be seen making a cameo in Trode's Room by taking the Royal Suites lift located in the north west corner of the Quester's Rest Inn located in Stornway. Talking to Trode, allows the player to gain the equip "Trode's Robes".

He also make an appearance in Dragon Quest Heroes: Rocket Slime in Mt. Krakatroda in Krak Pot's Cave with pictures on the floor and in the room where Rocket battles Pot Belly depicting him taking care of Medea and fixing up the Alchemy Pot. 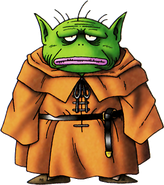 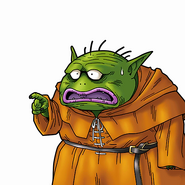 Trode as he appears in Dragon Quest of the Stars