I'm just some lazy bum, y'know. Should probably be making something of myself, but what am I doing? Going back and forth between games and fermenting in my bed, yaaaay.

Originally got into Dragon Quest when I was looking for a Final Fantasy game. Funny how that works?

Anyway, I like the series, though I sometimes ask myself why whilst playing and being frustrated by some of the less charming things. I've beat the original, the remakes of that and the second for the GBC, the GBC remake of III, the DS remakes of IV and V, VII (a looooong one), VIII, Rocket Slime and all four of the Monster games... well, mostly. I got an import of Caravan Heart, yo, but Gisvarg owned me pretty hard when my heal-duty Gem Slime kicked the bucket. D'oh.

Monsters are cool, if you ask me, so you'll find that a lot of my contributions focus on the monster articles. I might not know the meat of 'em, like highest HP and appearance rate, but I still try to type what I can about 'em.

I'd like to think I'm a laid-back sort, but chances are I'm more tense and uptight than I'd like to admit and/or believe. Probably gas.

And I'm putting this image here. Because I like it. A lot. 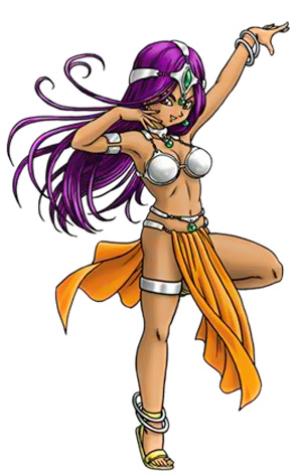 Retrieved from "https://dragonquest.fandom.com/wiki/User:PantheonSasuke?oldid=44188"
Community content is available under CC-BY-SA unless otherwise noted.