Valgirt is a boss monster in Dragon Quest Swords. He is one of several mirror bosses which are available after completing the main story of the game. He is a member of the Hydra family of monsters. His name backwards is "Triglav". In Slovenian mythology, "Triglav" is a beast with three heads. "Tri" is 3, "glav" is head.

Valgirt has 3 heads which must each be fought separately during the first phase of the battle. After defeating each head, Valgirt's life bar will be refilled and the player must fight all 3 at once. Upon defeating them again, Valgirt will fall and submit to defeat.

Valgirt's boss portrait if the player fights them for the first time.

Valgirt descends from the skies. 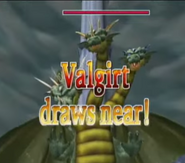 Valgirt grips the player with it's tail.

Retrieved from "https://dragonquest.fandom.com/wiki/Valgirt?oldid=179993"
Community content is available under CC-BY-SA unless otherwise noted.