II
The walking corpse is a monster appearing in the Dragon Quest series.

A corpse reanimated by unknown dark forces, it rises from the earth having already partially decomposed. The walking corpse thus appears to be melting away even as it drools from a mouth with several missing teeth. One eye is also missing from the face. It has frayed blue hair, a light tunic with a blue belt, and blue trousers, all tattered.

Although its physical attacks are relatively weak, they can poison an unprepared adventurer. Certain species can also give goosebumps, causing victims to miss their turns.

Walking corpses have a ghastly speech quirk wherein they wail, elongating certain vowel sounds as they maintain an inconsistent pitch and tone, represented by randomly mixed majuscule and minuscule letters in dialogue. They also have genders despite appearing as male, as each member of the Delmorgue family demonstrates in Dragon Quest XI with one of the female members even lampshades it by saying that she is obviously a girl despite it clearly being not obvious. 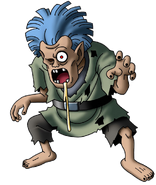 Walking corpse's artwork for the VI DS remake.
Add a photo to this gallery

Retrieved from "https://dragonquest.fandom.com/wiki/Walking_corpse?oldid=189623"
Community content is available under CC-BY-SA unless otherwise noted.