The Wight Knight is a character in Dragon Quest IX.

First seen and fought upon a black steed, the Wight Knight strikes an intimidating figure for only the second boss in the game. He is dressed in full black armour that is accented gold and adorned with a tattered white cape. His most distinctive feature, his helmet, displays a pair of golden horns protruding from the sides and a red plume flows from the back; when the battle commences his visor flips up to reveal a skeletal face with glowing red eyes. He wields a black javelin like lance that is strapped against his back in the overworld sprite.

At first hostile, but once defeated by the Hero he becomes much kinder. Originally full of malice at the thought of betrayal by his betrothed, he seeks to destroy anyone and anything that would get in his way. After being defeated and told what has happened to his kingdom he becomes grateful, kind, and determined to find the truth of his time spent asleep.

A spoiler draws near! Click 'show' to display, otherwise run away!
The hero first encounters the Wight Knight on the shores of Loch Storn. The Wight Knight initially terrorizes the town of Stornway, believing the Princess Simona to be his long-lost love Princess Mona. After defeating the "Wight Knight" he asks the hero to apologize to the king of Stornway on his behalf for the misunderstanding and heads off in search of his native kingdom, Brigadoom. While he was alive, he was known as the "Right Knight.

Wight Knight (also known as the Right Knight) is the former lover of Princess Mona and the subject of a nursery rhyme told to Princess Simona by her old nursemaid. He, years in the past, was transformed by Morag and forced into a slumber for what the demoness believed to be eternity.

However, after the Gittish Empire caused an earthquake when they attempted to destroy the Observatory as well as the Realm of the Almighty, he was awoken and immediately headed to what he thought was Brigadoom to seize who he thought was his Princess Mona. He defeats the entire palace guard and demands that the King of Stornway send Princess Simona to Loch Storn. By the time the Hero arrives in Stornway, the king has already put up a notice, desperate for somebody to rid his kingdom of this dark knight. After arriving and waiting at Loch Storn until after dusk, the Hero and his companions face off against the Knight.

His humiliation after he realizes that the princess in Stornway was not Mona spurs him to travel to Zere to inquire as to which way Brigadoom is. After being informed by the Hero where the fallen kingdom is located, he goes ahead of the party and arrives at the throne room, only to discover that the earthquake had also awoken Morag. As the Hero enters the room, the Knight falls victim to one of Morag's most potent curses and is forced to kneel there until the demoness is defeated and the curse is broken. Morag tries to cast a spell on the Hero, but it doesn't work, and they have a battle. When Morag is defeated, Princess Simona and a handful of royal guardsmen then arrive at Brigadoom, and Mona, through her descendant Simona, dances with the Knight one last time before his spirit departs for the afterlife.

The Song for Right Knight

The Wight Knight is one of the first bosses in the game, so it isn't too difficult to defeat him as long as your characters are around level 10. The strategy for this boss is first to have four characters, (however, this can also be done with just one character) so Wight Knight will not wipe you out with attacks like Multithrust (which deals four hits to random party members) and Bolt Cutter, which is a more powerful physical attack. He can heal himself with the Heal spell. It is a good idea to have a priest or a team member that knows Heal as Wight Knight has some fairly strong attacks.

Your minstrel should not use Crack in the fight, as the Wight Knight is strong against Ice, and instead heal or attack physically. They can also Egg On your warrior or other attackers.

He is weak against fire, wind and earth, so it is helpful to have a mage that uses Frizz handy. Just whittle down his health and heal up after his attacks and you should be fine. 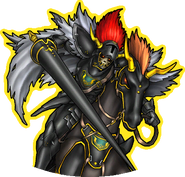 Wight Knight's artwork for MBRV.
Add a photo to this gallery

Retrieved from "https://dragonquest.fandom.com/wiki/Wight_Knight?oldid=185035"
Community content is available under CC-BY-SA unless otherwise noted.