Wormwood Creek is a village in Dragon Quest IX. It is a location of key importance in the plot relating to Serena and Corvus. Unless the hero arrives here along the storyline, all stores here (except the inn) will not serve any outsiders. This is probably a protection setting to prevent the player obtaining better equipment too early, since the town is reachable from Porth Llaffan after the ship is acquired.

When the final Fygg is obtained, you board the Starflight Express. When you're (presumably) close to the Observatory, Aquila comes and asks for all the Fyggs. You reluctantly agree (selecting "No" will do nothing as the game will not progress until you agree) and give him the Fyggs. After this, he thanks you, whereupon a loud voice praises Aquila for gathering the Fyggs. Aquila attacks you and almost kills you as you are unable to attack him because the Laws of the Celestrians forbid taking arms against a superior. After this, a large, black dragon (later found out to be Barbarus) and Hootingham-Gore attack the Starflight Express, and Aquila leaves with them.

You fall off the Starflight Express and land in a village, where a boy called Wallace comes to your aid and helps you. You find out you've landed in Wormwood Creek, whereupon the mayor demands that you attend a meeting at the church that evening.

When you arrive at the meeting, everyone thinks you are with the "Black Dragon" even though you say you aren't. Wallace comes and exclaims that they should believe the hero and runs off. You must find him north of Wormwood Creek, at Hope Springs. He then leaves the little cavern that you enter.

When you leave, you see a ghost. This ghost is the same one as the one you see at the Mountain Pass (Angel Falls) and Dourbridge. She sees you and realizes you are a celestrian and introduces herself as Serena. She asks you to bring her a necklace from the town at the Guardian Statue. You go to the beaten-up and old guardian statue and Wallace comes and says that perhaps the statue used to be elsewhere. You go to the church and see a statue on the right side and observe it. There you see a necklace. You pick it up and go back to Hope Springs to give it to the woman's ghost.

She reveals her name is Serena and says you need to go to the Bowhole to get to Upover, where The Hero of The Heavens will help you. When you get to the the Bowhole, it is locked by a mysterious power and then Serena opens the way for you. When you get to the end, you see a bow and arrow, that will "reveal the way" to Upover. However, before you can obtain it, a monster appears to test you and see if you are worthy. This monster is Gadrongo.

When you beat him, you get the Bow and go to Wormwood Canyon and fire it. A bridge of light appears across the ravine, and the Wormwood Creek villagers come to see. They realize that they have forgotten the true meaning of their village. Thus ends the story of Wormwood Creek, and begins the one of Upover.
Thou hast defeated the spoiler.

Hope Springs (Northeast of the region) 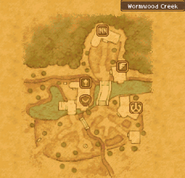 In-game map of the town.

Retrieved from "https://dragonquest.fandom.com/wiki/Wormwood_Creek?oldid=153556"
Community content is available under CC-BY-SA unless otherwise noted.