Yume o Shinjite (夢を信じて, translated as "Believe in Dreams") is the single for the homonymous song that is used as the first theme song for the closing credits of the 1989 TV anime Dragon Quest: Legend of the Hero Abel.

Japanese pop singer Hideaki Tokunaga performed and composed the songs, which were arranged by Ichizo Seo with lyrics by Hitoshi Shinohara. A very popular single, it reached top three on Oricon's single's chart at the time of its release. 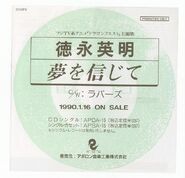 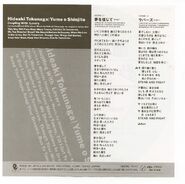 Retrieved from "https://dragonquest.fandom.com/wiki/Yume_o_Shinjite_(single)?oldid=174274"
Community content is available under CC-BY-SA unless otherwise noted.