Zere Rocks is a stone replica of the town of Zere in Dragon Quest IX. It is located at the peak of the Heights of Loneliness. It was made by a sculptor named Mason.

Years earlier, Mason had left Petra (His then girlfriend) to learn the art of stone carving. He had promised to be home in five years, but time escaped him, and he forgot about his promise to return. Petra eventually accepted that Mason wasn't coming back, and married someone else. Mason was heartbroken, and he built Zere Rocks as a tribute to all that he had lost. The only house that can be entered is the same house where Petra lives. A talking slime now inhabits the house. The basement is also in perfect state, unlike the one in Zere, which has collapsed.

In this peculiar place, you go to the north-west town and see a Slime, saying that he is protecting this place. Just then, you hear a giant shake in the ground.

You go out to see a massive stone monster (Stone Guardian of Zere Rocks) has come to protect the place. You defeat him and he drops a Fygg. You then see the ghost of an old man heading down a set of stairs.You follow and see this is old man Mason. He is glad his creation is safe and can now let himself go to the heavens. This ends the story.

The name Zere Rocks can, when said aloud, sound similar to the word xerox , which is a name closely associated with photocopiers. This further explains that, without a doubt, Zere Rocks is an homage, or a copy, to the village of Zere. 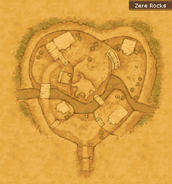 Zere Rocks
Add a photo to this gallery

This is where a Fygg can be collected

Retrieved from "https://dragonquest.fandom.com/wiki/Zere_Rocks?oldid=212823"
Community content is available under CC-BY-SA unless otherwise noted.